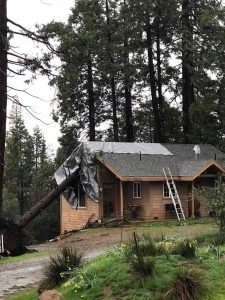 Update at 2:30 p.m.: The power has been restored to all 92 PG&E customers in Twain Harte. They had been without electricity since Tuesday afternoon following a vehicle accident involving a tree and power lines coming down on a pickup on Twain Harte Drive near Ponderosa Drive. Those roadways remained closed as crews continuing to clear debris from large fallen oak tree.

High winds brought down many trees, and one even caused extensive damage to a home. Thankfully, no one was injured in the incident. Some residents in Twain Harte tell Clarke Broadcasting that it appeared to be a tornado that passed through, but this has not yet been confirmed by the National Weather Service. The agency had issued a Tornado Warning at the time for southwestern Tuolumne County. The CHP dispatch also indicated the damage appeared like that of a tornado.

This morning there are 92 PG&E customers without power in Twain Harte. Full restoration is anticipated by 3pm today. It is impacting areas along Twain Harte Drive, Lava Road, Hunts Road and Plainview Road.

A special thanks to community news partners Richard Cavil, Nancy Hoyt and Denise Simpson for sending in photos. Pictures can be e-mailed to news@clarkebroadcasting.com.