Trees Are The Forest: The Wood Wide Web 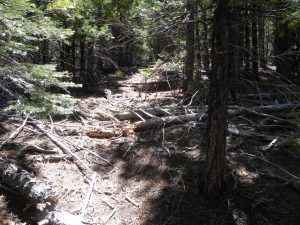 Example of forest overgrowth - just outside of project area

We usually think of a forest as a vast area filled with individual trees. We just assume they are individuals and, aside from pollinating and dropping seeds to propagate, they don’t have anything to do with one another. Nothing could be further from the truth. Under the forest floor is a network of soil fungi that, through the roots, connects all the trees together. This has been referred to as the “wood wide web” and is a means of communication from one tree to another. A forest can be thought of as a super-organism with electrical pathways connecting it.

The African acacia tree is delicious to giraffes. But when a giraffe begins nibbling at the leaves of an acacia tree, the leaves soon release a toxic chemical that stops the giraffe. So the giraffe goes to the next acacia tree, but that tree has already “smelled” the chemical from the first tree and releases its own chemical. The giraffe has to run around to a far distant tree that didn’t get the message yet, but that too, will shortly become toxic. With insects, the acacia tree releases a chemical when it “tastes” the insect saliva and sends out a chemical signal to attract predators to those insects.

Trees are social beings and they care for each other. Through the thin fungal threads (mycelium), they share sugars and nutrients with each other. In exchange, the trees provide the fungi with carbohydrates. The fungi help the trees suck up water and provide phosphorus and nitrogen. This is a truly symbiotic relationship that is essential for a forest to stay healthy.

To understand a forest, you need to understand selflessness. If a tree is suffering because it isn’t getting enough light, its neighbor that is blocking the sunlight actually grows its branches in such a way as to allow sunlight to its “buddy.” We don’t notice these amazing things about plants and trees because they move and grow at a glacial pace compared to humans. The oldest tree on earth – a spruce in Dalarna province in Sweden – is more than 9,500 years old. It has newer shoots above ground, but the roots were carbon dated and revealed its advanced age.

If a tree breaks off or is cut down, the underground mycorrhizal network may still feed it and it can regrow. If one tree isn’t getting enough water or nutrients, its neighbor will share the needed nutrients. In this way, the entire forest is a giant colony with “parents” and “children” living close together, since the seeds usually drop close by the parent tree.

Another phenomenon born of this symbiosis between trees is called “inosculation.” This word is from the Latin “osculum” which means “kiss.” Inosculation is the joining or uniting of two trees at the roots, branches or trunks. These are also called “marriage” trees. This usually happens between trees of the same species, but also can happen between two trees of different species. The trees grow so close together that their bark rubs off and they begin to grow together. There is an excellent example of this in Mi Wuk Village, where an oak tree has fused with a conifer.

Scientists have come to the realization of the interconnectedness of forests relatively lately and much research still is being done on just how this wood wide web functions. This is an important field because it will change the way we deal with and save our dwindling forests. This may impact how trees of a forest are harvested and forests are managed in the future.

“The Secrets of the Wood Wide Web,” by Robert Macfarlane in The New Yorker, August 7, 2016.