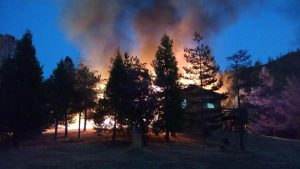 Update at 8:16pm: The Tuolumne County Sheriff’s Office reports that the fire is contained to the area surrounding the residential structure. What ignited the fire remains under investigation. Be prepared for activity in the area this evening.

Update at 8pm: CAL Fire reports that some of the initial resources that were dispatched are being called off, indicating that firefighters are having success extinguishing the fire in the 12500 block of Yankee Hill Road. The amount of vegetation burned is estimated to be 1-2 acres. Many remaining resources are expected to stay on scene for an extended period this evening. The Sheriff’s Office reports there are no evacuations in the surrounding area.

A special thanks to our community news partner Patrick McBride for sending in photos.

Original story posted at 7:45pm: Columbia, CA — There is a reported residential structure fire that has spread to some nearby vegetation in the 12500 block of Yankee Hill Road in the Columbia area.

The Tuolumne County Sheriff’s Office reports that it appears that all of the occupants were able to safely get out of the home. You will notice quite a little firefighting activity in the area this evening.

What ignited the fire is under investigation.