One Year Ago Today: Washington Fire 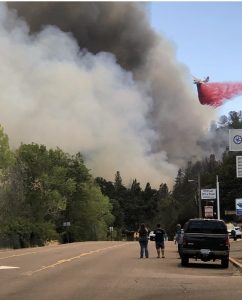 Sonora, CA — It is the one-year anniversary of the destructive Washington Fire that burned 136 acres and forced the evacuation of downtown Sonora and surrounding areas.

19 structures were destroyed. Fire officials have stated that thankfully the winds were relatively light that afternoon, allowing air and ground resources time to get in and aggressively extinguish the blaze before additional damage could occur.

“We have a lot of individuals out there who are not prepared, and wildfires can happen anywhere at any time,” she says. “We are trying to educate the public to be prepared, to be a part of the solution, to have a go-bag, understand that it can happen at any time, and to prepare for that.”

Among the 19 structures burned, there were 15 homes, and a city of Sonora storage building. Bietz adds, “There is a lot of learning with any wildfire, and the Washington Fire taught us that there was a lot of recovery efforts that were new to us because it was the first time that we had that amount of structural damage on unincorporated private land.”

Cleanup efforts related to the fire have concluded, with help from the state and outside agencies. Those who lost their homes have been notified that they can now go through the permit process if they choose to rebuild structures.

CAL Fire was unable to determine the cause of the blaze. We reported earlier that it ignited along Highway 108 and fire officials determined it was “accidental,” and ruled out arson.

There was a body located within the fire footprint, but officials have not identified the person. The Tuolumne County Sheriff’s Office reports that the body is still being examined by “the anthropology department and in the process of being identified.”