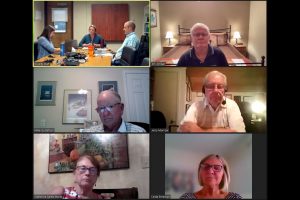 Sonora, CA — The planning commission in Tuolumne County spent just over two hours and 15 minutes reviewing the proposed Climate Action Plan that is designed to be incorporated into the General Plan.

The meeting was held virtually via Zoom. The commission has been holding meetings this way since the start of the COVID pandemic. At the beginning of the meeting, some members of the public who were logged-on voiced displeasure that they could not attend in-person. The Chair of Commission, Jerry Morrow, was having technical difficulties related to a weak internet connection, and it was difficult to understand what he was saying at the start of the meeting. At the recommendation of Community Development Director Quincy Yaley, he handed over the chair duties to the vice chair, Linda Emerson, who then led the meeting.

After hearing a presentation on the proposed Climate Plan, led by Yaley, various community members voiced opinions during the public comment period, stating both pros and cons. There were concerns raised about a lack of fire impacts highlighted in the report and the need for more forest thinning projects, to concerns about it taking away freedoms, to being too vague, or not having measurable timelines.

If approved, it would be the county’s first Climate Action Plan and staff noted that it would help the county’s chances to receive state grant funding.

In the end, the commission voted 4-2 in favor of recommending that it be adopted by the Tuolumne County Board of Supervisors. For example, commissioner Catherine Santa Maria stated, “We have to start somewhere, and I think this is a very good beginning.” Meanwhile, commissioner Jim Jordan said it was “ironic” that they are talking about needing to use more electric power on a day when there is a statewide flex alert calling for reduced consumption. He opposed the plan and argued it was more geared for urban areas than rural settings.

Voting in favor of endorsing it were commissioners Mike Gustafson, Emerson, Santa Maria and Morrow, opposed was Jordan and Larry Beil, and absent was Kara Bechtle.

You can find more details on the plan by clicking here. It will go before the board of supervisors next month.