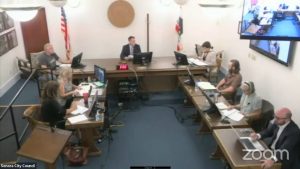 Sonora, CA — The Sonora City Council voted 5-0 last night to approve the ballot argument that will be sent to voters in favor of a one-cent sales tax increase in November.

It was authored by Mayor Mark Plummer and Councilman Andy Merrill, and can be found by clicking here.

Councilman Matt Hawkins argued, “As a traditional, constitutional, conservative, who is very fiscally conservative…I had never dreamed that I would be advocating for any type of tax increase in my life. But, we are at a point where the state has sucked the cities and the counties, especially rural cities and counties, dry of money.”

If approved by a majority of voters, it would generate an additional $3.9-million annually for the city’s General Fund.

Councilman Merrill indicated that he would like the city to itemize how the money would be spent to show the impact of the increase. Adding, “I truly hope that the citizens of Sonora will give us the opportunity to pass this measure so that we can show you what we can do with the additional funding.”

It was noted that councilwoman Suzanne Cruz recommended that the word “protect” be added to the ballot argument in relation to things like public safety and the community.

The vote to approve the argument was 5-0.

The Tuolumne County Supervisors are also moving forward a one-percent sales tax increase for the incorporated parts of the county. That measure would require 2/3 voter approval and specifically go towards roads, the sheriff’s office and fire.