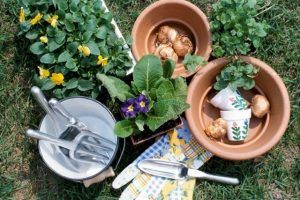 Nitrogen is necessary for the chemical processes taking place in living cells. It is used to make plant chlorophyll, DNA, amino acids, proteins and enzymes in all living things. But the nitrogen needed for plant life doesn’t come from mineral soil—plants get most of their nitrogen from decaying organic matter. Because soil organic matter comes mostly from plants – but plants can’t get their nitrogen from inorganic soil minerals or from the air – nitrogen appears to be the chicken or the egg story. No decaying plants means no plant-available nitrogen; no plant-available nitrogen means no plants.

There is plenty of nitrogen in the air. The problem is that it is in a gaseous molecular form (N2) that is not usable by plants. Unfortunately, plants never evolved the ability to break the nitrogen molecule found in air.

Symbiotic relationships have since evolved between plants and nitrogen-fixing bacteria. Plants provide carbohydrates for bacteria sheltered in root nodules of plants in exchange for excess nitrogen. Nodule-containing plants are used as rotation crops to improve soil nitrogen.

Plants can’t use nitrogen unless it’s in a “plant available” ion form. Ions are charged particles freely dissolved in soil water or chemically attracted to opposite charges on soil particles (such as clay). The two major forms of nitrogen ions are the negative ion (anion NO3-) as nitrate; and the positive ion (cation NH4+), ammonium.

Nitrogen fixers produce excess ions beyond their needs. These, and recycled organic matter ions, may be taken up by other types of microorganisms, or by plants. It is called immobilization.
Nitrogen ions become available again, called mineralization, when organisms die and are decomposed by bacteria and fungi. Nitrogen in this organic form can be combined in various molecules such as amino acids or urea, preventing it from returning to its difficult-to-utilize gaseous molecular state. This allows it to be recycled again by non-nitrogen fixing organisms as ammonium or nitrates. Additionally, free ammonium ions are short lived in the soil if not absorbed by clays or organisms, and will be converted to nitrates by microbes. This is called nitrification.

Nitrogen loss from soils is a major problem especially since we add excess nitrogen in the form of fertilizer to supply our agriculture super crops. Opposite charges attract. Soils generally have a predominantly negative charge due to the presence of clays. Clays help prevent the positive ammonium from being leached from the soil by water. Unfortunately, the quick conversion of ammonium to nitrates, a negative ion, increases the loss of nitrogen. Additionally, certain bacteria convert ammonium directly into the non-available gaseous form (denitrification). This occurs under flooded soil conditions as specific microbes use the oxygen in nitrate as a substitute for O2.

Because nitrate moves readily through soils, it is a major polluter of waterways and a potential health hazard. It is one of the factors making many hundreds of square miles in the Gulf of Mexico at the mouth of the Mississippi River into a “dead zone.” Nitrates in drinking water interfere with the blood’s ability to carry oxygen. Although documented deaths have been few, nitrates in drinking water can be lethal to infants. Nitrogen leaching is one reason to think about reducing the amount of nitrogen-containing fertilizers we apply to our lawns and gardens.

Frank Rauchschwalbe is a past University of California Cooperative Extension Master Gardener of Tuolumne County.