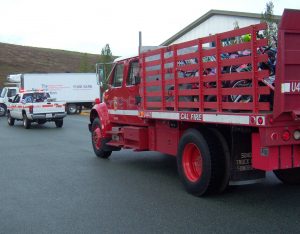 San Andreas, CA — Just ahead of the holidays, Santa’s Express has dispersed a huge haul of gifts, food and cheer to about 1,000 Calaveras families.

This year’s event also provided bicycles and other toys for about 700 local children and included Butte Fire survivors who lost everything in the wildfire.

Led by the San Andreas-based Resource Connection Food Bank, the annual effort, which has been going on now for more than a quarter-century, involves hundreds of volunteers, numerous area agencies and groups, and donations from a community full of supporters, including those who since Thanksgiving added to the red collection boxes and barrels when they shopped locally.

Qualifying families who preregister to participate receive all the fixings for a holiday feast and other foods to help get them through the New Year. During the actual Santa’s Express private event, which happened Monday, local kids were treated to a holiday social and photos with Santa while their parents or guardians slipped away to make toy selections from the colorful assortment.

Ahead of the hoopla, members of the Cal Fire Tuolumne and Calaveras units in Murphys, Valley Springs, San Andreas, Mountain Ranch, Arnold, Tuolumne, Prevention and Vallecito Camp on Saturday contributed an impressive stash of unwrapped toys and bicycles. Many of these were collected at the recently held fourth annual toy drive held in honor of Sue Arrouzet, a Cal Fire captain who was injured in the line of duty back in the fall of 2011. (Click upper left image box to view related photos.) “Cal Fire has supported Santa’s Express for many years,” notes Food Bank Director Jeannie Hayward, adding that the bountiful array are bound to help make Christmas extra special for local children in need.