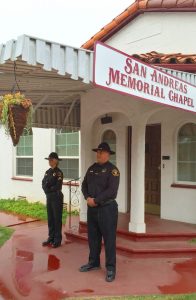 As previously reported, Sheriff Gary Kuntz died suddenly last Thursday night at his home. He was 63. Friday afternoon, the Coroner’s Office confirmed the cause as a heart attack. The guard will remain posted at the chapel until he is laid to rest.

Updated public viewing times have been given as Wednesday, Nov. 4 from 5 to 8 p.m., and Thursday, Nov. 5 from noon to 8 p.m. at the San Andreas Memorial Chapel (254 W Saint Charles St.). Following a private family Mass Friday morning, a procession from downtown at 10 a.m. will proceed to Ironstone Vineyards, where a celebration of Kuntz’s life will begin at noon.

Sheriff Kuntz, a local resident for 45 years and a 30-plus-year veteran of the sheriff’s department, ran for and was elected to its top post in 2010. After being reelected last fall, he was sworn in to a second term this past January. Until the county board of supervisors choose to appoint an interim sheriff, the highest ranking captain has the temporary authority to discharge the duties of the post. In the past, when Kuntz has been away from his post, Capt. Jim Macedo has filled in. The supervisors expect to address the issue as one of their main topics at their Tuesday board meeting.