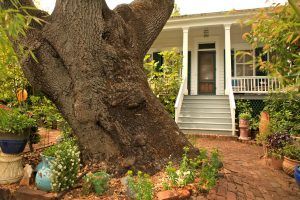 All Hallow’s Eve is almost upon us. As we face the dark, scary night ahead, our thoughts turn to vampires, ghosts and goblins rising up from graveyards to snatch our souls. In centuries past, superstitions grew up around these creatures and, on Halloween, the veil between the living and the dead was thought to be at its weakest. Souls of the dead could walk the earth on this night and bedevil the living.

Some plants, like fennel and St. John’s wort (when tied with a black ribbon), were specifically used to ward off evil. Yew trees were traditionally planted in graveyards because it was thought that the roots would grow down into the mouths of the dead to keep them from talking. The mountain ash, or rowan tree, was planted to keep evil spirits from bothering the dead. Mandrake roots in a graveyard were infused with the soul of the person buried beneath. If someone pulled up the root, it would screech, and its scream would kill the person who pulled it up.

The Monkey Puzzle Tree was often found at the edge of a graveyard because the sparse foliage kept the devil from hiding during a funeral so he could steal the soul of the recently departed.
Apparently, evil spirits don’t like the appearance of reeds and keep their distance, so these were often planted in churchyards.

Graveyards have always been scary places, but they are also places of peaceful repose and the plants that were sown there had special meaning. Many plants were sown for what they said about the person buried. It was thought that flowers would grow on the grave if the person led a good life. If the person had been bad, only weeds would grow. The Victorians, especially, were particular to the meaning of flowers and plants.

Marigolds were symbols of grief. This was because when the sun set, they would fold up and their heads would droop as if in sorrow. Pansies were planted as signs of remembrance and humility. Periwinkle (vinca minor) was planted close to urns as they were tokens of simplicity.
The poppy was used to promote peace and eternal sleep. A rosebud on a tombstone meant that a child was buried there.

The Druids considered the oak the tree of life and mistletoe that grew there was placed on the dead to make them immortal. Many cultures across the globe associate plants with symbolic meaning for the dead. Today, in our American culture, much of the symbolism is lost, except for the color white to symbolize purity. Funeral arrangements come in all sizes and colors.

On this Halloween, think of all the potions and herbs that can ward off the evil spirits. Of course the evil spirits in costumes that will be coming to your door are different. Those little spirits can be warded off with candy and goodies. Make sure you give them treats, lest you be visited with a trick. And don’t forget to recycle your jack-o-lanterns into pumpkin pies or breads.