Barrasso: The Costs Of Regulations Are Real 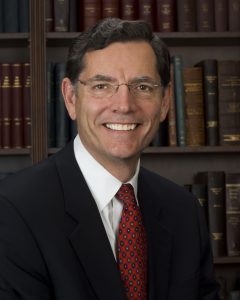 Wyoming Senator John Barrasso delivered this week’s GOP Address. He was Tuesday’s KVML “Newsmaker of the Day”. Here are his words:

Let me tell you a story about a family in my home state.

Andy Johnson is 32, he works as a welder. He and his wife Katie have four kids and they live out in the country. They have a few cows and some horses. Two years ago, the Johnsons wanted to build a small pond in their front yard. They got their plan approved by the state, and used the pond to provide water for their animals. They thought it was a beautiful addition to the dry landscape. The pond attracts birds and other animals that make our state a special place to live.

Everything was fine until the Johnsons got a visit from the United States Environmental Protection Agency. Even though the state of Wyoming had approved the pond, the federal government had not. The Johnsons now face fines of more than $37,000 every day, until they remove the pond.

This is what’s happened to government in America. It’s gotten so aggressive, so inflexible, and so unyielding – and seemingly for so little purpose. And it’s going to get worse.

The Obama administration is seizing new authority to control what it calls Waters of the United States. This includes things like irrigation ditches, isolated ponds – even low points in the landscape where water might collect after a heavy rain. The consequences of this new federal authority will be severe. Local land-use decisions will now be driven by Washington bureaucrats. And this new water rule is just one of the thousands of regulations that Washington is churning out. In the final 15 months of the Obama administration, Washington bureaucrats are working overtime, to finalize new rules on everything from prairie puddles to power plants.

Just this week, the White House released a new ozone rule that will increase electricity costs and decrease reliability. In this administration’s race to control more of what Americans do every day, it has lost all perspective. The rules are based on ideology, rather than practicality. The result is an explosion of expensive regulations and new federal requirements on hardworking families. Washington’s assault on Andy Johnson in Wyoming could soon be repeated all across the country.

The Obama administration has issued more than 2,500 new regulations in the past six years.
Complying with these regulations is expected to cost our economy a staggering $680 billion.
People will be forced to spend millions of hours filling out the paperwork.

You might ask, what do Americans get for all this time and money?

One of EPA’s rules on power plants would cost as much as $2,400 for every $1 in direct benefits. This imbalance is a big reason why Americans’ wages have been stagnant since President Obama took office. The costs of these regulations are real. They are significant to our economy, to good-paying jobs, and to the ability of Americans to live freely. That’s why Republicans are fighting so hard.

The White House’s cynical response is that only polluters would oppose these new environmental rules. I’m fortunate to live in Wyoming, one of the most beautiful, pristine places in the world. We protect fiercely our open spaces, our clean air, and water. At the same time, the entire country benefits from our responsible and reliable production of American energy. We’ve proven you can have both.

The Obama administration long ago left this reasonable objective in the dust. What the administration won’t tell you is that both Republicans and Democrats in Congress oppose many of these regulations – including the new rules on Waters of the United States.

Senators Joe Donnelly, Heidi Heitkamp and Joe Manchin – all Democrats – joined us to change these water regulations. Yet commonsense changes to all this rulemaking are being blocked by the president and the liberal Democrat leaders in the Congress.

Even the courts have dealt the Obama administration serious setbacks to its regulatory rampage. But by the time the courts finally act, the damage is already done – those jobs are gone, and communities suffer. The head of the EPA bragged that it didn’t matter if the Obama administration lost in court – because the rules had already been in effect for three years.
That’s outrageous.

Meanwhile, the fines against Andy Johnson continue to pile up, and could exceed $16 million.
His family cannot afford to fight anymore. Just like the Johnsons in Wyoming, the American people can’t afford the overreach and the near-constant onslaught of new Washington regulations.

This fall, Republicans will put legislation on the president’s desk to rein in runaway regulations. He will have to choose between big government and hardworking Americans.
We’ve already made our choice.