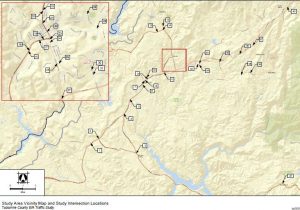 Sonora, CA —  The Tuolumne County Transportation Council (TCTC) released a draft of an updated evaluation of the County’s roads and intersections today. While several intersections and roadways were identified as needing improvement many are doing just fine.  Wood Rodgers prepared the report in collaboration with TCTC. They analyzed 41 intersections and 150 roadway segments throughout the County.

Eleven of the 41 intersections in the study were reported as currently operating below acceptable peak hour traffic standards. Only eight of the 150 study roadway segments were likewise reported as below standard. The report also evaluated the effect of traffic signals to improve the problem areas.

The traffic report rates roads and intersections from A to F with A being minimal delays and F jammed or grid-lock conditions. The 11 intersections and 8 roads in the two tables were noted as failing to meet a required level of service (LOS) of a D or above during peak morning and evening commute times.

The first four intersections in the table below are already planned according to TCTC’s current list of mid-range capital improvement projects. The report recommends a signal at Parrotts Ferry and Sawmill Flat Road, noting addressing the issue is not planned to be completed until 2040. Conditions did not show they would improve in the future under any of four projected population estimates. Other traffic signals, and in some cases turn pockets, are recommended for the rest of the intersections some of those are planned as well.

The last three roadways at the bottom of the second table are also not projected to improve in any of four projected population estimates. Chapter 5, pages 31-39, of the 74 page report outline the Impacts And Mitigation Measures (problems and impact of proposed solutions) of the below listed areas. To view the full report click here.