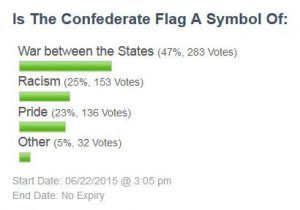 An informal myMotherLode.com poll asking what the Confederate Flag is a symbol of received over 600 votes from June 22nd through the 24th. The results were 47% for the flag representing the War between the States, 25% racism, 23% pride, and 5% other.

Before the 150th anniversary of the start of the Civil War, the Pew Research Center conducted a formal poll based on telephone interviews March 30-April 3, 2011 among a national sample of 1,507 adults 18 and older living in the continental United States. The poll found that a majority, 58%, said they have no particular reaction to the Confederate flag. Among those who had a reaction to the flag, more than three times as many say they have a negative reaction, 30% as a positive reaction 9%.

The Associated Press reports, during the American Civil War (1861-1865), the secessionist, pro-slavery South’s military flew several styles of Confederate battle flags and the rebel government also flew several Confederate national flags. What most Americans think of as the Confederate flag, is a rectangular version of the square Confederate Army battle flag — a star-studded blue ‘X’ overlaying a field of red. The square version was flown by various Confederate Army units, including the biggest: Gen. Robert E. Lee’s Army of Northern Virginia.

Later, in 1948, the national Democratic Party adopted a civil rights platform at its national convention and many Southern Democrats walked out of the convention to form a third party; the State’s Rights Democratic Party, popularly called Dixiecrats. The Dixiecrats used the confederate flag as their party’s symbol, they were a short-lived segregationist political party that received 39 presidential electoral votes. The splits in the Democratic Party were expected to produce a victory by for the Republican nominee Thomas E. Dewey, but Harry S. Truman won the election.

Recently a wave of national retailers pulled Confederate flags after Wal-Mart (HQ, Bentonville, Arkansas) said that it would remove all Confederate-themed items from its store shelves and website after the South Carolina-shooting suspect, Dylann Storm Roof, appeared in photos holding the flag. Amazon, eBay, Etsy, Google, and Sears are among those who removed Confederate flag merchandise. Big Lots “does not carry any merchandise promoting the Confederate flag, nor will we,” a spokesman told the AP. Dollar Tree Inc, Family Dollar Stores Inc, Dollar General and Target Corp said they do not carry any Confederate flag-related merchandise.

Yesterday NASCAR chairman Brian France called the Confederate flag an “insensitive symbol” he personally finds offensive. He said the sport will be aggressive in disassociating the symbol from its events.

South Carolina Gov. Nikki Haley called for the removal of the Confederate flag from the grounds of the state Capitol June 22nd. On June 23rd the legislature sent two bills to remove the flag to the state’s Judicial committee for review.

There have been demonstrations in support of allowing the flag to be displayed at government buildings. They say the flag symbolizes pride in their region’s heritage, to honor fallen Confederate soldiers, and note that parts of its design were/are incorporated into the state flags of South Carolina, Mississippi and Georgia.

The Associated Press noted in Virginia, Democratic Gov. Terry McAuliffe vowed to pull the flag as choice of emblem on vehicle license plates — a step allowable since a recent Supreme Court ruling found that it was not protected speech. Tennessee Republican Gov. Bill Haslam said on June 23rd he also wants the flag removed from license plates, and the bust of Ku Klux Klan founder Nathan Bedford Forest pulled out of the Tennessee statehouse.