A Federal Flood Of Funding For The Proposed Sites Reservoir 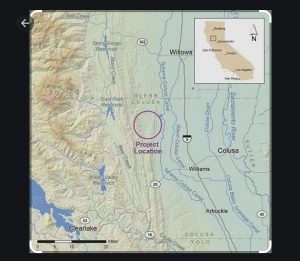 Sacramento, CA — A major boost was given today to a long-delayed plan to build a giant reservoir in Northern California to help the region to withstand droughts.

The Environmental Protection Agency announced on Thursday it intends to loan the proposed Sites Reservoir Project in Colusa County northwest of Sacramento nearly $2.2 billion, about half the total cost. Sites Project Authority officials call the loan a “game-changer,” as the idea has been around since 1950, but could not get enough funding.

It will take up to two years for the federal government and project officials to negotiate the terms and sign documents before the money is delivered. Once completed, the reservoir would hold between 1.3 to 1.8 million acre-feet, about enough water to supply 3 million households for one year. It would be nearly twice the size of the most recent reservoir built in California, New Melones, which was completed in1980 and is the state’s fourth-largest reservoir.

The Sites Reservoir is estimated to cost about $5.2 billion. The project authority calculates that adding the EPA funds with about $875 million from a 2014 voter-approved bond, another $450 million loan from the U.S. Department of Agriculture and an undetermined potential investment from the U.S. Bureau of Reclamation should be enough money to complete the reservoir by 2030.

There are some hurdles that need to be cleared before construction can begin possibly in 2024. There are regulatory processes, and one possibly big obstacle is an environmental review since the Sites project is not connected to a river or stream, like most reservoirs. Instead, operators will have to pump water from the nearby Sacramento River.

Fierce opposition is expected from environmental groups. The Natural Resources Defense Council argues the project will take too much water from the river, harming endangered salmon, and the water will be more expensive because of pumping. To appease those concerns, Sites officials point out that their plan calls for 40% of water releases to be for environmental reasons. They add that the low-interest loan from the EPA will reduce the cost of the water by 10%.