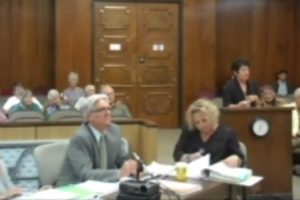 San Andreas, CA — The Calaveras County Board of Supervisors voted to approve an update to the Housing Element of the County’s General Plan. The vote was 3-0 with Chris Wright, Michael Oliveira absent.

The Housing Element updates the existing 2010 plan to include ways to create an adequate supply of housing for all income levels, provide accessible housing for persons with disabilities, and address housing for specialized needs such as: transitional housing, supportive housing, senior housing, homeless shelters, alternative forms of housing.

Peter Maurer, Planning Director for Calaveras County described the plan as necessary to be certified with the state to qualify the county for grants and funding for housing. The plan builds on the 2010 plan, according to Maurer, because there has not been significant new growth or expected additional environmental impact from housing in Calaveras since 2010.

Maurer explains further, “The Housing Element is, besides a lot of data regarding housing availability and type and population growth… there is a set of goals and policies that try to address housing needs as well as a number of implementation programs.”

At the meeting six spoke in favor of approving the Housing Element and five spoke against it. Those against it cited a variety worries about more government involvement and funding for Calaveras housing. One speaker mentioned, due to how long the rest of the board meeting took, several individuals left the meeting before they could speak. Supervisor for District 4, Debbie Ponte stated her support for the entire Housing Element and finding grant money to hire a person “to drive the housing element objectives.” Supervisor Steve Kearney, District 5 expressed reservations about the plan, noting there is no funding for it and it will need updates after the General Plan is updated. The public was invited to speak again, several affirmed their previous support and opposition, before the Supervisors voted in favor.

According to Maurer, the Board’s approval means they intend to try to implement as many of the housing programs as they can over the next five years. “Including hiring a housing coordinator and establishing a housing advisory committee that would work with that individual.” Maurer adds the Board will establish priorities annually based the updated General Plan’s Housing Element and what can be accomplished given the budget situation and staffing needs.