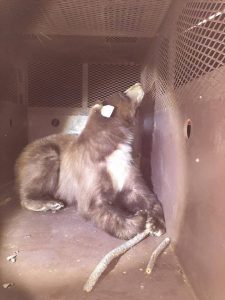 CDFW shares this picture of a bear caught last week in nearby Tracy, where it had been roaming downtown.

Jamestown, CA — This afternoon, California Department of Fish and Wildlife (CDFW) officials provided an update and comments regarding an early morning traffic accident, reported earlier, that killed a bear.

According to CDFW spokesperson Kirsten Macintyre, the bear was a young male, healthy, not underweight and not tagged. The incident occurred on westbound Highway 108, between Jamestown and Oakdale, just south of Lake Tulloch.

“Encountering a bear at this low of an elevation is not typical but it is not unheard of,” according to Macintyre. She adds that July 2013 was the last time a bear was found in similar environs, at a location roughly two and a half miles east. Macintyre points out that it was considered very unusual last week, when a bear was seen roaming the streets of downtown Tracy in San Joaquin County. CDFW was able to tranquilize and remove it (see image, at top left).

When asked if the ongoing drought conditions might be related to the recent bear activities, Macintyre replies, “We don’t have any scientific data showing that there is a direct correlation between the drought and wildlife behavior, but we do know that wildlife will disperse in search of water sources, if necessary. So, it stands to reason that they’d have to be traveling farther in a time of drought.”

According to CDFW data, countywide, not specific to where the bear was hit, about two bears are hit by a car every year in Tuolumne County. While there have not been any nuisance bear calls in the area, officials always tell people to take precautions. “Don’t leave attractions like garbage and animal feed outside,” cautions Macintyre. “That’s just inviting trouble. We don’t expect to see any more cases like this — but the potential is always there.”