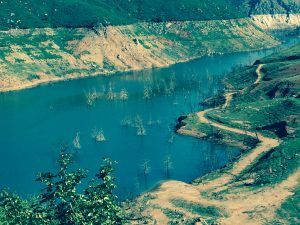 Sacramento, CA – Blame the much warmer than normal spring temperatures for the early start-up of the spring salmon pulse flows from New Melones Reservoir that began in the wee morning hours yesterday.

The pulses, which initiated Tuesday around 1 a.m., figure into the tentatively brokered package struck earlier this week between the Feds and senior water districts over management of the waters during this fourth year of drought, according to Bureau of Reclamation spokesperson Erin Curtis.

Curtis explains the reason for the earlier than normal activities. “The ambient temperatures are high…the temperatures in the river are higher in normal…and so the fisheries agencies came to us and were of the opinion that it would be best to do a pulse flow now in order to move the steelhead smolts out of the river and into the cooler water of the delta,” she states. “The reason is that the temperatures in the river are only going to get warmer and at some point…going to be too inhospitable for them and they will die.”

After conferring with the water districts, the decision was made to utilize 15,000 acre-feet over two-week period as part of the fisheries spring pulse flows underway now through April 2. The pulse flows, part of water operations for the New Melones project every year, are based on current conditions. “Last year, these pulse flows would have happened in April. The amount of water does not change, it’s just when it happens,” says Curtis.

Explaining further, Curtis adds, “The overall temporary urgent change petition includes these pulse flows as part of an overall package of operations that we are anticipating. We are asking the state Water Resources Control Board (WRCB) to approve certain relaxations of requirements related to water quality and fisheries requirements, so we can maximize deliveries out of the system this year while still protecting the environment…and so we have worked together with the fisheries and the state agencies.”

In this fourth year of drought, Curtis points out that lessons learned and working closely between stakeholder groups has become essential. “We are looking to do that with a much smaller quantity of water available to us. And so…we need to be sure that we’re meeting public health and safety needs, first and foremost, and so that is why we are going are obviously to the State Board, to make sure that they can approve what we’re talking about doing.” Operations this year she says will be vastly different in some ways, not only because of the request for relief from certain requirements but because there just is not enough water to meet every requirement and still deliver water out of the project.