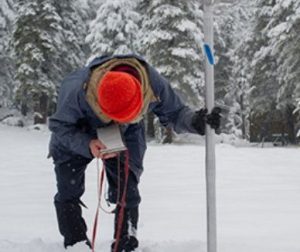 Sacramento, CA – The 3rd Manual Snow Survey is set for March 3, but already the Department of Water Resources (DWR) says the most recent electronic readings reveal a trend of declining water content in the snowpack this winter.

Electronic readings on Thursday show the statewide water content is just 19 percent of the historical average for the date. DWR spokesperson Doug Carlson says history is not on our side in terms of the February readings. He adds, “Water content for all of February 26th [readings] that we’ve been measuring for decades is 24.2 inches.  We’re at 4.6 inches so you can see how far below the norm we are, going back decades.”

Thursday the National Weather Service issued a Winter Weather Advisory for the Sierra Nevada above 4000 feet with a potential for three to twelve inches of snow.  Carlson says, while that is good news, it is not enough to make up what is needed.  He explains, “If we had 150% of normal precipitation by the end of the water year, we might have a chance to get out of the drought, according to our state climatologists.  Right now, in the central region…we’re only at 48% of normal.  It’s only about 89% of normal in the northern regions. Elsewhere, the average is probably around 60 to 70% of normal for the entire water shed, that’s a far, far cry from 150%.”  Carlson adds the past two winter storms this year have been too warm, producing mostly rain when it is significant snowfall that is needed.

The two previous manual surveys taken this year in December and January found the statewide water equivalent was just about 50% and 25% of the historical averages on those dates.