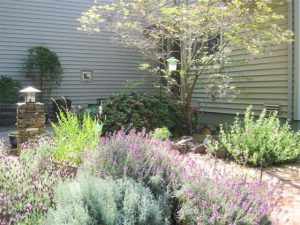 Indigenous peoples in California have been using a multitude of horticultural techniques for thousands of years to protect preferred native plants that were used for food and medicine and to cultivate desired characteristics in those modified for tools and other products. According to Dr. Kat Anderson, an ethnoecologist at UC Davis, these techniques included coppicing, soil and weed management, tillage and burning. A number of modern California Indian tribes continue these traditional practices of ‘plant caring’ today.

Coppicing is a form of pruning in which a shrub is cut nearly to the ground. Indigenous California natives coppiced shrubs such as redbud, buckbrush, deerbrush and various species of willow to stimulate the growth of ‘switches’ with the desired characteristics needed for making baskets and tools: long, slender, straight and free of leaf scars. Switches with these traits are seldom found on mature plants but are numerous on new shoots sprouting from a coppiced shrub in the subsequent growing season. Additionally, natives pruned shrubs regularly to prevent switches from growing too large in diameter and to keep shrubs from growing too tall.

Roots of sawgrass and certain pines as well as rhizomes (an underground stem of a plant that sends out roots from nodes along its length) of bracken fern and sedges were utilized for structural elements in basketry. Basket weavers preferred long, straight, unbranched roots and rhizomes. To achieve these desired traits, the California Indians practiced soil and weed management,. since soil compaction and weed competition decreases the length to which roots and rhizomes grow. As a result, several seasons prior to harvesting, native horticulturalists carefully selected plants that grew in ideal soil conditions (sandy), loosened the soil and weeded around chosen roots or rhizomes and then cut the uncovered roots and rhizomes some distance from the plant. This stimulated the sprouting of new roots or rhizomes which, in loose soils free of obstacles and weeds, would grow long and straight.

The deliberate setting of fires by California Native Americans had the greatest impact on modifying the wildlands where they lived. Burning of small trees, brush and other organic litter resulted in large open corridors which increased visibility and made it easier to hunt, protect against enemies and gather acorns and other plant products. Fire was used to force game out for capture or to char certain insects which could then be collected for food. The burning of an area stimulated the growth of certain plants such as berry bushes, increased rhizome production and reduced competition so that valued plants grew larger and more numerous. California Indians also used fire to change the shape and colors of maple, willow, redbud, sourberry and hazelnut branches to be used as materials in future basketry. Wildlife habitats, particularly for native foragers such as deer, greatly improved during the years following deliberately set fires resulting in an increase in their populations.

California natives have been respectfully caring for native plant communities for centuries using a variety of techniques that include burning, tillage, soil and weed management and coppicing to protect valued plants and cultivate desired characteristics in those plants. When they managed the environment in which they lived, these indigenous ecologists did so sustainably to ensure future food supplies and materials. Many
California tribes continue to use and now share these horticultural practices today; these practices are thought to be an integral component for the conservation of California native plant communities for future generations.