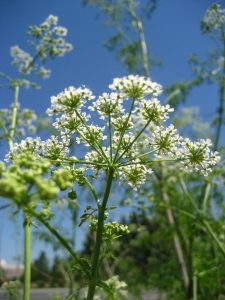 All Hallow’s Eve is almost upon us, and the night will be a-buzz with spooky spirits, dead and undead, walking the earth as the veil between the spirit world and the living world fades. This is the night when witches fly on birch brooms and mix up deadly potions in order to work their dark magic, spreading disorder and mayhem in their wake. The herbs and poisonous plants they used are legendary and are infused with superstitious lore.

The plant kingdom is host to thousands of weird and eerie floral growths, many of them ghastly, and many of them deadly if touched or ingested. Some we are familiar with because, according to legend, they have been used in witches’ potions or used to ward off evil. Others, while not necessarily poisonous, look as if they just stepped out of a horror film. Here are a few:

Bleeding tooth fungus (Hydnellum peckii):
Hydnellum peckii is a mycorrhizal species, and forms mutually beneficial relationships with a variety of coniferous trees. It grows on the ground in masses, scattered around, or alone. When they are still young, they “bleed” a bright red, oozy juice that has anticoagulant properties. When it ages, it turns a nondescript brown and loses its horrific appearance.

Dracula orchid (Dracula vampira)
There are 118 species of Dracula orchids, ranging from dark purple to black, with a bat-like appearance. They are mostly found in Mexico, Central America, Colombia, Ecuador and Peru. Like their namesake, they prefer a cool, dank, shadowy habitat.

Black Bat Flower (Tacca chantrieri):
The bat flower has ears and whiskers. It is jet black and very spooky looking. This rare plant grows wild in China, but in this country, it is difficult to grow. It needs shade, well-drained soil, just the right amount of water, and temperatures no lower than 30 degrees.

Carrrion plant (Stapelia gigantea)
This plant is a dark red and, when in bloom, smells like rotting flesh. Flies are attracted to the smell and, in landing on the plant, they pick up pollen and carry it to another plant. In some botanical gardens the public is warned before they enter the area where the plant grows that the smell can be overwhelming.

While these plants are nasty-looking or smelling, there are many more serious, deadly poisonous plants:

Deadly Nightshade (Atropa belladonna):
This plant is so poisonous that even touching it can make your skin break out in blisters. It is in the same family as potatoes, tomatoes, eggplants and peppers. Witches used the juices in many of their brews, according to folklore. The belladonna comes from the Italian and means “beautiful lady.” Apparently, Italian women would take just a little and the atropine in the plant would cause the pupils of their eyes dilate, making them more alluring to men.

Henbane (Hyoscyamus niger):
According to legend, this plant was one of the ingredients in witches’ flying potions. A salve made from this plant, rubbed on the skin, would produce a hallucinogenic flying sensation.

It was one of the ingredients traditionally used in beers as a flavoring, until replaced by hops in the 11th to 16th centuries (for example, the Bavarian Purity Law of 1516 outlawed ingredients other than barley, hops, yeast, and water).

Mandrake (Mandragora officinarum):
Mandrake is part of the nightshade family and contains the deliriant, hallucinogenic atropine, among other hallucinogenic chemicals. It was believed, in Greek and Roman times that mandrake would shriek when its root was pulled out of the ground. The shrieks would kill anyone who heard them. In J.K. Rowling’s “Harry Potter,” there is a scene where the students have to replant mandrakes. They are given ear muffs to protect them from the screams.

The Romans believed that mandrake root would cure demonic possession. The Greeks used it in love potions.

Poison hemlock (Conium maculatum):
This plant is in the carrot family. The young plants emerge in the spring. The leaves look like parsley and carrot tops and are sadly sometimes mistaken for them. It is also related to the dill, fennel and anise family. Hemlock is highly poisonous and was administered to Socrates in his jail cell after he was tried and sentenced to death for corrupting the minds of the youth of Athens. He died of the concoction in 399B.C.E.

Tomorrow night all the goblins and creepy crawlies of Halloween will be out trick-or-treating. After browsing through some of the poison plant books and articles, it appears that we need not don masks and costumes to be scary. Mother Nature can be a very spooky lady.