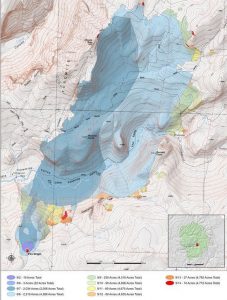 Yosemite, CA — The vegetation fire burning in Yosemite National Park is 80% contained and the acreage has grown an additional ten acres to 4,771.

The cost to battle the blaze has risen to $4.5 million. As crews get a handle on the flames, the number of firefighters has dropped to 424, down from 570.

Park officials say there are still a few isolated heat sources along the fires perimeter with most of the heat dispersed through the fires interior. Crews continue to patrol containment lines and address hot spots as needed. Isolated heat sources are scattered throughout the fire. Air quality continues to increase as fuels are consumed.