Lights Out In Sonora 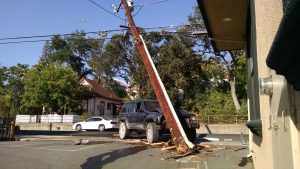 Sonora, CA — The power is out in downtown Sonora due to a single vehicle accident involving an SUV crashing into a power pole on Stewart and Gold Streets. Police say Stewart Street will be closed from William to Gold Streets as emergency crews clear the wreckage.  Power crews are already on site repairing the pole.

According to Pacific Gas & Electric, more than 570 people are without power. They estimate the power will be restored around 8:45 pm. There is no word on injuries at this time, but witnesses say a female driver was seen alert at the scene when the ambulance arrived.

Update 6:30 pm: Sonora Police report emergency crews are not removing the wreckage as the power lines are live.  The pole, which is sheared off at its bottom, remains on the SUV as PG & E crews make their repairs.