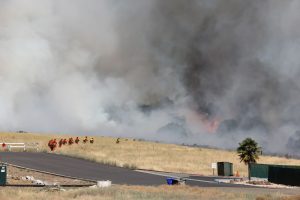 San Andreas, CA — Cal Fire has dropped the acreage from 120 to 109, while the containment remains at 75%.  Crews remain on the scene this morning mopping up and checking for hotspots.

Cal Fire Spokesperson Nancy Longmore says, “The reduction in acreage is due to GPS mapping.  We’ve got five hand crews and two engines doing fire line construction and mopping up of hotspots. They’ll be folks on scene until the fire is completely out.”

Longmore says there is no estimated time of containment. Cal Fire reports the flames broke out at around 3:30 Friday afternoon on the 300 block of George Reed Road near Highway 49. One structure, a 20 x 20 foot corral shed, was destroyed.  At the height of the blaze, 30 homes were threatened and residents were evacuated on Howell Road, Magers Way and the Saddleback Subdivision. Those residents were allowed to return to their homes after about two hours.  Heavy smoke shut down a stretch of the Highway 49 for about an hour.