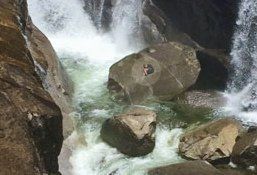 Yosemite, CA — A backpacker falls from a waterfall and narrowly escapes with his life.  The backpacker, a 22-year-old from Union City, California was hiking with friends at Upper Yosemite Falls.  Park Officials say his friends called 911 and alerted park rescue of the fall.

The victim had dropped his glasses and when he went to get them, he slipped and fell into the middle falls, which dragged him down to the “inner gorge” where he plunged about 100 feet into a pool of water.  Luckily, he was able to climb up on a boulder. In the picture to the left, you can see the man clinging to the rock. A helicopter rescue crew hoisted him to safety.

Ranger Kari Cobb says, “Hikers should always stay on the trails because one small mistake could mean life and death.  If he was not able to get on that boulder he would have died.”

The backpacker was treated for hypothermia, but had no other injuries.  You can watch the May 28 rescue by clicking here.