Halloween Horrors: The Dark Side of Mother Nature 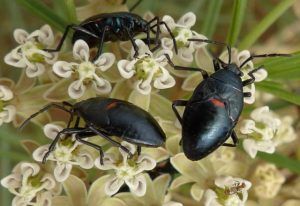 As Halloween approaches, Mother Nature has some macabre critters of the bug and insect variety that are every bit as eerie and unsettling as any Halloween costume or horror film.

To start with a seemingly pious bug, the praying mantis (order Mantodea), is actually a deadly eater and mater. While she is mating, she bites the head of the male clean off and continues chomping the rest of the poor victim until he dies. She then saunters off well-fed and fertile.

The Japanese giant hornet (Vespa mandarinia japonica) is so big that, in flight, it resembles a small bird. It stings or sprays its victims – including humans – with a flesh-dissolving acid. It usually aims for the eyes. Embedded in this acid is a pheromone that attracts the other hornets in the hive to the victim and they attack en masse.

Another creature to throw the most stalwart person into a state of entomophobia (fear of insects) is the emerald cockroach wasp (Ampulex compressa). They live in Asia and Africa. This wasp turns cockroaches into zombies. The wasp first jabs its stinger into the thorax of the insect then, as the cockroach tucks in its chin as a protection, the wasp inserts her stinger into the insect’s head tissues, carefully, maneuvering until it reaches the brain. After this ghastly operation, the cockroach is in her power and doesn’t move. She bites off the cockroach’s antenna and uses it like a leash to lead it to a new home, where she lays one egg in the cockroach and seals up the chamber. The poor insect is left as food for the egg when it hatches.

The botfly (family Oestridae) lives in Central and South America. Their larvae are internal parasites of mammals. The botfly traps a mosquito, fly or a tick and lays eggs on it. When the insect bites a mammal, the eggs are then deposited into the victim. In 2013, ABC news reported that a couple, while visiting Bolivia, were bit by mosquitoes and assumed the raised welts were as a result of the bites – until they noticed that the welts were moving. It was very painful to have them removed.

The Goliath spider (from the tarantula family Theraphosidae) is the biggest of all the spiders. They are a foot across. They have fangs about an inch long, but their bite feels more like a bee sting and there have never been human deaths reported due to their bites. They inhabit the rain forests of northern South America. The local cuisine includes this spider and it is cooked by singeing off its hairs and roasting it in banana leaves.

This Halloween, no matter how frightening the costumes, they can hardly compete with Mother Nature for grizzly appearances. Of course, many bugs and spiders are actually beneficial for the garden and are needlessly killed off by insecticides. But next time you are in the jungles of South America or Africa watch out for these ghastly creatures. HAPPY HALLOWEEN!

Francie McGowan is a former University of California Cooperative Extension Master Gardener of Tuolumne County. UCCE Central Sierra Master Gardeners can answer home gardening questions.  In Tuolumne County call (209) 533-2912 and in Calaveras County call (209) 754-2880. You can fill out our easy-to-use problem questionnaire here. Check out our website here. You can also find us on Facebook.