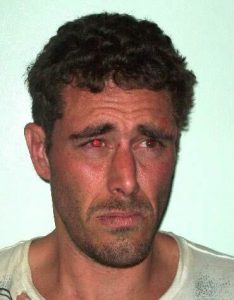 Tuolumne County, CA — A man is accused of attacking a utility worker, and later picking a fight with officials at the Tuolumne County Jail.

The CHP was the first to arrive and detained Johnson. Tuolumne County Sheriff’s Deputies later responded and placed Johnson under arrest. The Sheriff’s Office reports that he was in possession of a “dagger” type object, fireworks, and a “heavy bolt tied to the end of a rope.” Johnson also proceeded to spit at the deputies, and screamed that he was, “The Star of David.”

Johnson was placed in leg restraints and taken to Tuolumne County Jail. The Sheriff’s Office reports that he later fought with jail staff and bit a deputy. Johnson was tased and placed into a restraint chair.

The utility worker injured his ankle in the incident and two deputies received minor injuries. Johnson is a transient.