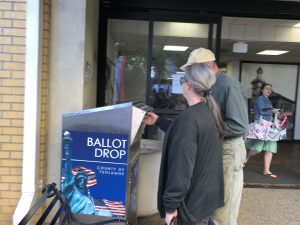 Sonora, CA – In-person voting centers are open for a second weekend to make it easy for voters to cast their ballots in the Governor’s Recall Election.

There are five centers including one in Sonora, Twain Harte, Jamestown, Tuolumne, and Groveland. All are open from 8:30 to 4:30 p.m. for in-person voting. Click here for the schedule and here for the ballot drop box locations across the county.

On Friday, California Gov. Gavin Newsom voted to keep himself in office, days before the recall election against him ends. The Democratic governor cast his ballot at an early voting center in Sacramento and stated, “I’m just focused on doing the job, encouraging folks to turn out and to get our base out at this critical juncture.”

The recall of Newsom was spurred shortly after he was spotted dining at the exclusive French Laundry restaurant with a large group, while also calling on Californians to avoid that situation. He also enrolled his children in a private school at a time when most public schools were doing distance learning.

The last day to vote is Tuesday, and at least a third of California’s 22 million registered voters have already cast ballots. Tuolumne County has been running well above that number sometimes even double the state’s average on ballot returns. County Clerk and Auditor-Controller Debi Bautista details,  “We’ve received a little less than 19-thousand ballots. We’re really close to about 56%. We’ve never had these kinds of numbers before an election and especially four days before one.” She added it shows that voters are really engaged. When asked about the breakdown according to political parties, Bautista says her office does not run those types of reports.

Most of the voting has been done through mail-in votes. Bautista noted that election day is when the county receives about 10% of the vote, typically. Trying to avoid that crush and noting the only slow area has been at the voting centers, three opened last weekend, she disclosed, “We’re hoping that we get a lot of turnout at the vote centers this weekend because so far in seven days we’ve only had 34 people vote at the centers.”

The Governor’s main challenger is Republican and conservative radio host Larry Elder, who yesterday stated that he is worried about possible voter fraud. He reported that he has an “integrity board,” with lawyers ready to look into questions about possible fraud or other irregularities.

Elder alleged, “I believe that there might very well be shenanigans, as there were in the 2020 election.” Referring to former President Donald Trump’s claims of fraud in his loss to Joe Biden.

Bautista takes issue with the fraud claims, stating, “I’m tired of being called names. I’m tired of being called a fraud (due to her position).” Regarding those views expressed, she contends. “There’s just too many checks and balances. There’s the manual one percent count that you have to count by hand, the signature verification, and volunteers versus using just staff. There’s a lot of checks and balances so fraud doesn’t happen.”