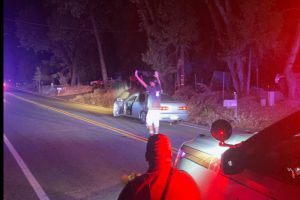 Amador County, CA – The revving of an engine caught the attention of an Amador County Sheriff’s Deputy as a car raced off, triggering a pursuit that spike strips ended.

The chase began just after midnight on Friday in the area of Ridge Road and Sutter Hill Road in Sutter Creek. The car took off at the intersection of Ridge Road and Highway 49. The deputy attempted to pull the vehicle over, but the driver hit the gas instead.

The suspect turned onto Climax Road while ahead another deputy had deployed a stop stick used to puncture tires. Rolling over the spike strip, the tires went flat quickly, as can be seen in the image box pictures. The suspect’s car began to slow and eventually stopped in the 19000 block of Ridge Road. Assisted by CHP officers with guns drawn and a K9 unit for backup, the vehicle’s two occupants were detained without further incident.

While questioning the suspects, it was determined the driver, 22-year-old Vesna Chhit of Stockton, had been drinking. He was arrested and booked for felony evading and D.U.I. The passenger was later released from the scene.