Another Tough Loss For The Wildcats 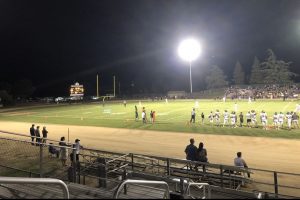 The Sonora Wildcats lost another close game, this time to Hilmar with a final score of 21-28. Sonora started the game with a 14-0 lead but saw Hilmar come back strong in the second half to win it.

Despite a few procedural penalties Sonora was able to find success running the ball as well as gain yardage on a well-timed pitch from #10 Bradley Curnow to #8 Kenny Scott. #44 Erin Greenway broke through the Yellowjackets defensive line and then breezed through the secondary coverage nearly untouched for a 40 yard run into the end zone. Wildcats #8 Kenny Scott came down with an acrobatic interception to give Sonora the ball and good field position. Curnow found #34 Chance Pimentel in the end zone who made a leaping catch in tough coverage to increase the lead to 14. As the first half wound down, Hilmar was able to break loose with a long run and narrow the wildcat lead to 7.

Hilmar came out strong after watching their homecoming half-time show and scored quickly on their first possession to tie the game. The Yellowjackets capitalized on fast tailback #14 Vargas, and tall wide receiver #23 Taylor to score two more unanswered touchdowns as the momentum shifted into Hilmar’s favor.

In the fourth quarter, the Wildcats fought hard to bring the score back within reach. A “roughing the passer” call followed by back-to-back pass interference penalties, all against Hilmar, led the Wildcats deep into the red zone. Sonora capitalized on the penalty yards with a throw to #34 Chance Pimentel in the end zone who made yet another great catch. With only 10 seconds left in the game, and down by 7, the Wildcats attempted an onside kick by #11 Tim Blackmore who sent the ball bouncing but the Yellowjackets were able to successfully field the ball and close out the game.

This brings Sonora to 1-3 on the season as they look forward to facing West next week in Tracy. Congratulations to the Chicken Ranch Casino Player of the game #34 Chance Pimentel.

The Summerville Bears play this evening at home against Hughson. The game begins at 7 p.m. and can be heard live on 93.5 KKBN.