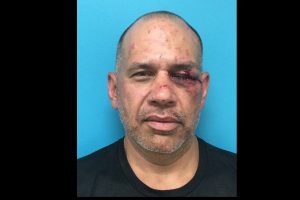 Jamestown, CA – A Jamestown man struggled with deputies when they tried to arrest him during a probation check.

Tuolumne County Probation’s High-Risk Supervision Team conducted several checks in the Jamestown area last week. One was in the area of 10610 Reservoir Road in Jamestown that resulted in 51-year-old James Grant being taken into custody on several warrants, including assault with a deadly weapon. Before the handcuffs could be clasped on Grant, however, he refused to put his hand behind his back as ordered by a deputy and a probation officer. Instead, he began to struggle with them and “physically resist” arrest, according to sheriff’s spokesperson Nicco Sandelin.

While the scuffle only lasted only a couple of minutes, both the deputy and probation officer involved suffered minor injuries. In Grant’s booking photo in the image box, he has a black eye and a scratch across his nose but it is unclear at this time if he got those during his arrest. Subsequently, Grant was arrested for felony resisting arrest in addition to his warrants. His bail was set at $20,000.