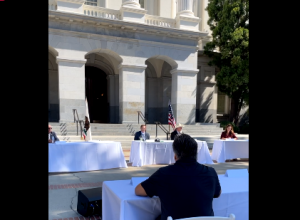 Sacramento, CA — Disappointed that efforts to pass wildfire-related legislation have come to a standstill at the state capitol, a group of Republican lawmakers held a forum this morning near the capitol steps.

GOP leaders say the forum was quickly scheduled after the current session’s only planned legislative hearing on wildfires was canceled. The focus today was on “barriers, challenges and solutions” related to preventing catastrophic wildfires.

Assemblyman James Gallagher helped to coordinate the forum, and opened by stating, “We’ve lost too many lives and too many communities. Today, South Lake Tahoe is under siege. We can no longer accept this. I won’t accept this as the new normal.”

He called for reforming the California Environmental Quality Act to allow for increased forest thinning efforts, in addition to ramping up strategies like prescribed burns.

Indicating that fire prevention efforts should be an all-hands-on-deck approach, he added, “CAL Fire can’t do this work on their own at the pace and scale that is needed. We need to work with non-profits, fire-safe councils, and the private sector. Even with these devasting fires, we can see clear examples where forestry management, and cooperative partnerships with the private sector, have saved lives and property.”