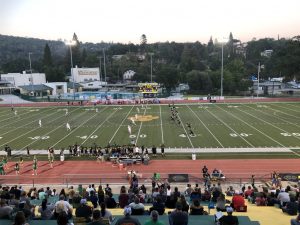 Sonora held a lead over Ripon for the entire game as the Wildcats looked strong on offense, defense and special teams.

Sonora took an early lead in the game concluding a two play drive with a pass from #10 Bradley Curnow to #34 Chance Pimentel for a touchdown in a trend that continued throughout the night. The Wildcats next possession ended with #26 Cooper Moberg carrying the ball into the end zone .

A strong defensive showing by the Wildcats kept Ripon scoreless until they found the end zone with 9:13 left in the second quarter. The two teams then exchanged scores with #10 Bradley Curnow dropping a well placed pass to #3 Steelman in the corner of the end zone. With the two point conversion the Wildcats advanced their lead 20-7 before Ripon answered it to make the score 20-13. With 3:52 left in the half Sonora tried a half back option from #22 Cade Clifton that found #34 Pimentel uncovered in the end zone sending Sonora into the locker room up 26-13 at halftime.

In the third quarter Sonora was able to capitalize on an interception provided by #8 Kenny Scott with a third touchdown pass to #34 Pimentel this one for 40yds. From the 32-13 lead Sonora defense once again made a stand until the start of the 4th quarter when a long series of plays saw Ripon able to score on a run from the one yard line line. Sonora controlled the clock in the fourth quarter shutting down any chance that Ripon had to make it a one score game with another interception by the Chicken Ranch Player of the game #8 Kenny Scott