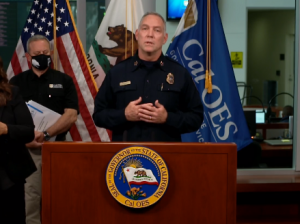 Sacramento, CA — With over 13,500 firefighters working to contain a dozen large California wildfires, the head of CAL Fire says the state is currently on pace to break last year’s record-breaking wildfire season which had over 4.3-million acres burned.

Chief Thom Porter says, “Today, we are also almost three times the number of acres burned in California, over our five-year average. Fires are burning in ways that no one has seen before.”

Firefighters from across the west are currently helping to battle the state’s various incidents, and the highest priority for resource allotment is currently the 117,000-acre Caldor Fire in El Dorado County. There is nine percent containment.

Porter is calling on all Californians to pack a to-go bag in preparation of future incidents. Late August and September are often very fire-prone periods.

“Get that stuff ready,” he says. “Every single Californian, this is my charge to you –  be ready for the emergency that is coming to your doorstep at the least appropriate, or least expected, time. And when it is time to go, just go.”

The second highest priority incident is the 731,000 acre Dixie Fire. Officials have recently slowed the spread and gained 41-percent containment. It is the largest single fire in the state’s recorded history.