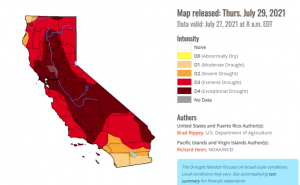 Sacramento, CA — The US Drought Monitor indicates that the recent triple-digit temperatures continue to rapidly dry vegetation across California.

Last week about a third of the state was in the most severe “exceptional drought” category. The latest map released this week shows that nearly half of the state is now in the category.

The US Drought Monitor has released a statement, “Further expansion of moderate to exceptional drought was introduced in parts of California and the Northwest, as agricultural, wildfire, and water-supply impacts continued to mount.”

August and September are often peak fire months in California ahead of the rainy season.

All of Tuolumne and Calaveras counties, except for the highest elevation areas, are under the most severe “exceptional drought.” The other parts are labeled “extreme drought.”