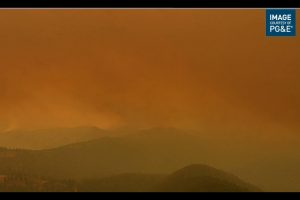 Update at 8:15 a.m.: CAL FIRE with a morning update shows the acreage of the fire increasing to 9,500. The containment has also increased to 15%, 8 structures have been burned with 600 threatened.

Update at 4:25 p.m.: The acreage and the containment have doubled on the River Fire that has forced resident evacuations and is burning in the mountains of Mariposa and Madera counties. CAL Fire reports the fire’s size has jumped from 4,000 this morning to 8,000 this afternoon and the containment from 5% to 10%. Crews are not only battling the flames but the extreme heat and rough terrain. Five structures have been destroyed, but CAL Fire has not detailed what type of buildings. Further details on the blaze regarding evacuations, road closures and shelters can be found below.

Update at 12:20 p.m.: CAL Fire updates that five structures have been destroyed in the River Fire burning in the mountains of Mariposa and Madera counties and has forced residents from their homes. No details were released on what types of buildings. They do add some encouraging news as the acreage is holding at 4,000 acres and there has been a slight climb in containment from 4% this morning to 5 % this afternoon.

“Firefighters continue to aggressively attack the fire while dangerous heat persists. Extreme fire behavior, due to low fuel moisture and persistent drought, is a concern. Crews are working hard to construct and reinforce control lines. Damage assessment is ongoing.”

Additional resources have arrived on the scene, upping the fire personnel from 251 to 477. There are currently 9 crews and water tenders, 83 engines, 12 dozers, and 7 helicopters working this fast-moving blaze.

A Red Cross shelter has been set up at New Life Christian Fellowship Church 5089 Cole Road in Mariposa County. Road closures in Mar

Original post at 5:33 a.m. written by Nic Peterson: Mariposa, CA–A fast-moving wildfire that has been dubbed the “River Fire” has burned over 4,000 acres and is 4% contained according to CAL FIRE. The River Fire has been burning in the mountains of Mariposa and Madera counties after it ignited near Oak Grove Road and Oak Grove School Road on Sunday afternoon which has forced residents in that area to evacuate.

251 fire personnel are currently battling the blaze and dealing with difficult terrain and anticipated hot and dry weather which will make achieving additional containment problematic. In Mariposa County, a Red Cross Evacuation Center has been set up at New Life Christian Fellowship.