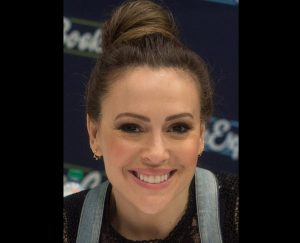 Sonora, CA — Television personality Alyssa Milano is exploring the possibility of running for the congressional seat that covers the Mother Lode.

Milano, who is politically active on issues ranging from gun control to healthcare, has a home in Truckee, which is part of Tom McClintock’s Congressional District Four. She told The Hill newspaper that she is “gathering information” and speaking with “different consultants” and the “community” about the possibility of a run in 2024. She argued it would take someone with name recognition and deep pockets to turn the Congressional seat from Republican to Democrat.

Last month Milano tweeted to her 3.6 million followers disapproval of a vote by Congressman McClintock related to an Asian Hate Crime Bill. She then teased, “Should I run against him?” The post received 57,000 likes on the social media platform.

Milano said she will decide whether to run for House District Four following the 2022 midterm elections.

Milano, 48, has starred in numerous television and film productions, possibly best known for the eighties sitcom “Who’s the Boss.”

She endorsed Senator Bernie Sanders for President in 2016 and supported Joe Biden during the last election.

McClintock, who is very popular among conservatives, has represented the district since 2009. He also previously served 22 years in the California legislature, serving as a Senator and Assemblyman. He was also twice the Republican nominee for state Controller.

District Four covers all of the Mother Lode region, and stretches into parts of Sacramento, Lake Tahoe, and down towards Fresno.