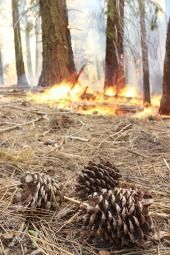 Tuolumne County, CA — The Rim Fire Incident Command reports that the forward spread of the fire has stopped along most of the perimeter.

Officials report that the official containment percentage remains only 80% though, because the potential for spot fires jumping the containment lines remains a concern in some areas. The fire is most active in the Clavey River, Reynolds Creek and Jawbone Creek drainages. It is also burning strong to the west of Harden Lake, Harden Road and Tioga Road. Officials believe the fire will spread some northeast into the Yosemite Wilderness areas north of Hetch Hetchy.