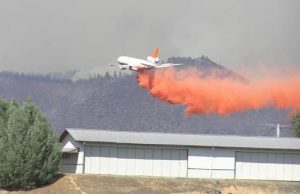 
“It jumped the river and started coming up our side of the canyon. The planes were bombing between us and our neighbors and then us and the river. That’s when the firemen came in and told us we had to get out. My husband didn’t want to go and the deputies said he had to leave. I had to leave my chickens and cats, but the firemen I hope will save them,” says Hastings.

“There has been a lot of activity. We’ve seen well over 20 trucks go by our house. I’ve watched various CHP and police cars rush down the street. It’s getting a little nerve racking on this end. I know the fires still not up to our door, but because we’re kind of backed up against some ranch properties it’s a little scary,” says Pennel.

Also, Thursday afternoon Sherriff’s deputies began notifying many ranchers outside of Tuolumne City that it would be beneficial to start moving livestock in the event that an evacuation notice is issued.

On a separate note: Both Summerville Elementary and High School Districts will be closed Friday due to the smoke.