The Snakes Of Ireland 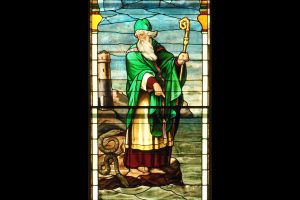 As St. Patrick’s Day draws near, my thoughts turn to all things Irish. Many of the legends that abound on the Emerald isle are tied up with the flora and fauna of the place. Leprechauns, fairies and shamrocks are all born of the forests and bogs of the Irish landscape.

One of the most intriguing legends is that of St. Patrick driving all the snakes out of the island and into the sea. Ever since he came as a missionary in the fifth century and performed that miracle, there have been no snakes in Ireland.

The truth is that there were never snakes in Ireland! According to Nigel Monaghan, naturalist and keeper of natural history at the National Museum of Ireland in Dublin, “At no time has there ever been any suggestion of snakes in Ireland, so [there was] nothing for St. Patrick to banish.”

In the last Ice Age, about 15,000 years ago, Ireland became separated from the rest of mainland Europe causing a 12-mile water gap (the North Channel) between Ireland and Scotland. This made it impossible for snakes to reach the island from Europe. Iceland, Greenland, New Zealand and Antarctica also have no snakes.

The part that isn’t legend concerns St. Patrick’s real life. St. Patrick was born in Roman Britain in the fourth century, CE. At 16, he was captured by Irish raiders and taken to Ireland as a slave. After six years in slavery, he escaped and sailed back to Britain. He became a priest in the Christian church and decided to bring the religion to the pagans in Ireland.

There is some thought that the snakes were a metaphor for paganism, which he, in fact, did drive out of Ireland, especially the Druids, through conversion to Christianity. The serpent was important to the Druids for healing purposes, among others, and the ancient symbol of the serpent circle in which the snake devours its own tail symbolizes the never-ending circle of life.

Snakes have historically been associated with evil. Most people are deathly afraid of them. Films about giant snakes preying on people, or someone being thrown into a snake pit are the stuff of nightmares. Unlike the legends about them though, snakes are mostly beneficial, especially to gardeners. Garter snakes, for example, feed on worms, rodents, ants, grasshoppers and crickets, as well as other garden pests. They play a very important role in the food chain due to their expert ambushing techniques that allow them to prey on such elusive pests as grasshoppers.

Striped racers are one of several species of snakes that live in the Sierra Nevada. Some of the others include the rattlesnake, rubber boa, gopher snake, king snakes, garter snake and many others. Of these, only the rattlesnake is venomous.

Snakes are very shy and aren’t out to get humans. They can sense the slightest vibrations in the earth around them and tend to hide from oncoming footfalls. They smell through their forked tongues and, when sensing danger, slither away to hide in places like rocks, gopher holes and underbrush.

So, this St. Patrick’s Day, when all the folklore and legends are being recounted, remember the poor, maligned snake in Irish lore. Unlike Ireland, we are fortunate to have snakes in California. For all you Sierra gardeners, be happy if you see a discarded snakeskin in your garden showing that your pests are being taken care of by a benign, slithery friend that helps keep your thumb green. ERIN GO BRAGH!