9/11 War On Terrorism Memorial On Display In Tuolumne 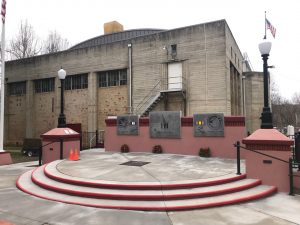 Tuolumne, CA — After years of fundraising and garnering community support, the new 9/11 Global War on Terrorism Memorial is on display in Tuolumne.

Frank Smart with the VFW Post 4748 is encouraging everyone to stop by and take a look.

He says, “The memorial is not only beautiful to the eye but emotional to the heart, and the brick walkway just adds overall to that feeling.”

The walkway showcases names of military members and first responders. He says that bricks can still be purchased for $50-$100 based on the size. Click here for information on how to download the brick form.

“We filled up the original spaces we had created and have now created more space as people are still wanting to honor the families in this manner,” Smart said.

The idea for the memorial was developed by Smart and local Iraq war Veteran Aaron Rasmussen. They were aided in the design by retired landscape architect Mike Wharton and Engineer Jerry Fuccillo. Candace Olsen, a 2019 Summerville High graduate, helped raise $90,000 for the project.

Smart adds that the memorial was also a project of veteran Keith Dale Wann. Veteran Christina Wilkinson did design work.

In addition, Smart says money was donated by Clarke Broadcasting’s H. Randolph Holder and Confidence residents Roger and Judy Haughton. The Haughton donation funded a time capsule that was filled with local artifacts and buried last week at the site. It is set to be opened 2076.

Smart says the VFW Post 4748 has seventy members and it has been a monumental task to build the memorial while also working to meet the requirements for being named an All-State post and All-American Post.

About a year ago the members started calling the group the “Little Post that Could,” in reference to the popular children’s book, “The Little Engine That Could.”

The memorial is situated on the east lawn of the Veterans Memorial Hall and is lighted during the evening hours.