State And Local Unemployment Numbers Jump Due To COVID-19 Crisis 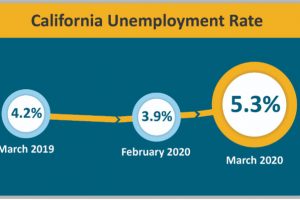 Sacramento, CA – California’s jobless rate shot up to over five percent with the Mother Lode’s spiking even higher.

The state’s rate jumped to 5.3% in March, up from 3.9% the previous month, forcing an abrupt end to California’s record jobs expansion of 120 months, as detailed in Friday’s Employment Development Department (EDD) report. The increase of 1.4 percentage points from February to March was the state’s largest unemployment rate increase on record going back to 1976, according to  department officials,, who notes this reflects the impact from the coronavirus restrictions that began in mid-March.

Tuolumne County’s rate hiked 1.2 percent to 6.2 percent in March from 5 percent in February, leaving 1,340 out of its labor force of 21,680. Calaveras County’s unemployment rate rose by the same amount, reaching 5.4 percent last month from 4.2 percent the previous month. That resulted in 1,160 unemployed out of its 21,530-workforce. San Mateo County had the lowest unemployment rate in the state at 2.8 percent and Colusa the highest at 22.4 percent.

March’s record 99,500 nonfarm payroll job loss was the fourth largest on record. It was driven by declines in six of California’s 11 industry sectors, with the largest in Leisure & Hospitality by a decline of 67,200 jobs. That is attributed to drops in full-service restaurants, food services and drinking establishments. Other services and construction also took a hit, with 15,500 and 11,600 losses respectively.

The only job gains were in government garnering an additional 5,200 workers, which was mostly due to a rise in local government employment as wells as federal numbers boosted by U.S. Census jobs.

Earlier this week, the EDD reported it had processed 2.7 million new unemployment insurance claims between March 15 and April 11.