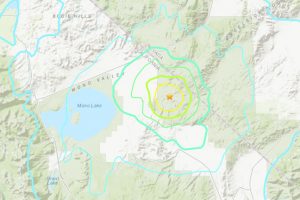 Sonora, CA — A shaky start to Saturday for some Mother Lode communities.

The earth began to rumble around 7:36 a.m. from the epicenter, which is the star on the United States Geological Survey (USGS) map in the image box, near the California-Nevada border just over five-miles southeast of Mono Lake and northeast of Yosemite National Park. It rocked the former gold-mining ghost town and historic state park of Bodie, California nearly 20 miles from the epicenter. No immediate reports of damages or injuries were made, according to the Mono County Sheriff’s Office.

Here at Clarke Broadcasting along South Washington Street in downtown Sonora, it was as if a wave rolled through with the walls creaking first and then studio microphones visibly shaking. It was over within minutes and then the phones lit up with residents reporting in from Sonora, Jamestown, and Twain Harte that they had felt the quake.

It was a preliminary 5.2 magnitude earthquake and measured a depth of six miles with several aftershocks reports the USGS. Two of those shocks registered at more than a 3.0 magnitude.