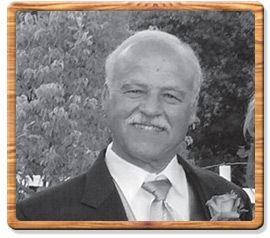 Tony Benites, Debbie (his wife) moved to Tuolumne County in 1977 from Hayward, California. Tony always wanted to live and raise his family (Tony III, Brian and Amanda) in the mountains, in God’s Country. They are the proud grandparents to Dominick, Bryson and Marcus.

In 1978 Tony purchases the 10,000 sqft Coors Distributorship warehouse. He continued to expand the business over the last 32 years. Purchasing Miller Brewing Company, Heineken, Corona and Sierra Nevada, they now carry over 30 brands in a 25,500 square foot warehouse. For over 20 years Coors and Benites Distributing Co. have been proud sponsors of The Mother Lode Round-Up.

In 1987 Tony along with Randolph Holder (owner of Clarke Broadcasting) started the Family to Family Project to help families in need at Christmastime. Along with generous retailers in Tuolumne and Calaveras counties, the caring public and a volunteer staff 3,880 food baskets and 8,300 children have received special gifts at Christmas.

Tony is one of the founders of the Mother Lode Bank (the only locally owned bank in Tuolumne County) opened in 2004.

Tony was state wrestling champion for San Lorenzo high school for four years in a row. Because of his love of the sport, Tony coached wrestling at Summerville High School from 1982 to 1986 and in 1994 as assistant coach while his sons were on the team. He left coaching in 1998.

Tony purchased the township of Standard from Southern Pacific Industries Lumber Company in 1996. He has been restoring the older buildings and has added three new buildings trying to recreate the look and feel of the town when it was bustling in its heyday. In 1999 Tony received the Entrepreneur of the Year, and New Building Award for Standard. 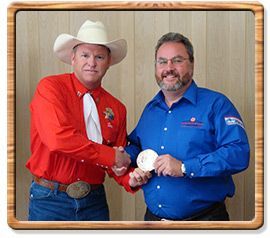 Dan has a long history in the telecommunications industry as he worked for Sierra Telephone prior to coming to Golden State Cellular in the early days of wireless. He is a current board member and past president of the Rural Carrier Association which represents the 75+ companies like GSC located throughout the United States. Last year he was named Tuolumne Chamber of Commerce’s Entrepreneur of the Year. He is the proud father of JD and Kendra.

Golden State Cellular and its partners are Mother Lode pioneers. In 1895 they started providing the first traditional telephone service on a barbed wire fence. In 1989 Golden State Cellular installed the community’s first cellular tower. For the first time, this new cellular technology allowed people to call for help from their cars. In addition, mobile phones spurred economic growth by allowing local realtors and the business leaders to untether themselves from their desks.

Golden State Cellular began operating from a store front in the Timberhills Shopping Center. As with most new businesses, it was necessary to keep operating costs at a minimum. Thus, the office of the General Manager, Dan Rule, was also the restroom since it was the only room with power. One day, while sitting on his brand new white chair at his filing cabinet desk using his cellular telephone, the other party asked, “What is that noise?” Dan quickly responded, “Road noise.” Actually, it was the bathroom exhaust fan. He says “Thousands of you have entrusted us with your wireless needs and desires and we sincerely appreciate it.” 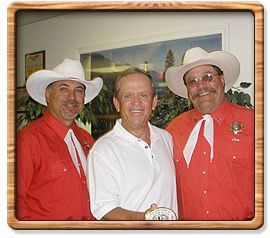 The 2008, 51st annual Mother Lode Round-up Top Hand Award goes to the Management and Staff of our Round-up Radio partner Clarke Broadcasting. Owner Randolph Holder was presented this award seven years ago but the Posse membership felt it was time to honor Larry England, the On Air personalities, News Team, and the Sales and Marketing staff at Clarke Broadcasting the home of KVML, KZSQ, and Country radio KKBN the radio home of the Mother Lode Round-up. The attention Clarke Broadcasting paid to this 51 year partnership between the Tuolumne County Business Community and the Sheriff’s Posse has meant everything to the continued success of this great weekend parade and rodeo.

Top Hand Award – Pat Sieben, Sonora High school’s band leader and music teacher, is justifiably the appropriate recipient for the Tuolumne County Sheriff’s Posse’s 2007 “Top Hand” buckle award. Pat, personally and with his Sonora High Golden Regiment Band “the most awesome band in the universe”, has been a steadfast participant and supporter of the Mother Lode Round-Up Parade and Rodeo since he arrived in Tuolumne County in 1983.

Because of his long time support of the Mother Lode Round-up, Brent Wallace has been selected as the 2006 Tuolumne County Sheriffs Posse Top Hand buckle award recipient. Brent has been the Tuolumne County Administrator for the past eight years and has been an advocate of the Mother Lode Round-up and has maintained significant County support for this great event since he took the reins of the County Administration.

The Tuolumne Band of Me-Wuk Indians Community Council is the 2005 Mother Lode Round-Up recipient of the Top Hand Buckle Award. The tribe has been an ardent supporter of the Round-Up and the Sheriff’s Posse for many years. The Tribal motto is ” Building a Sense of Community Through Sharing.” The tribe has lived this creed by being a great neighbor in supporting all Tuolumne County non- profits efforts with financial support and participation in most of the large and small charitable events that take place every year in our County.

The central Sierra Nevada is the traditional Me-Wuk homeland, comprising of the Northern Band homeland in the counties of Amador and Calaveras to the North, the Central Band around Tuolumne County and the Southern Bands in Yosemite and Mariposa Counties. The Tuolumne Rancheria established in 1910 is comprised of descendants of all three regional tribes.

The Tuolumne County Sheriff’s Posse would like to recognize this year both Police Chief Duane Ellis, and Lieutenant Pat Tonegato as our first time ever co-recipients of the prestigious “Top Hand Buckle.” Duane and Pat have both offered countless hours over the years in an unpaid service in the support of the Mother Lode Round-up parade, handling public safety logistics, routing and directing traffic and looking the other way when Coyote Sam and his gang of misfits shoot up the town. Their cooperation and support in helping the Sheriff’s Posse stage the second largest parade in the State of California has been immeasurable to the success of the event.

Lieutenant Pat Tonegato was born in Sonora to Donna and the late Joe Tonegato. He graduated from Sonora High School in 1971 and while there was President of the Student Body. Pat joined the Sonora Police Department in 1974 as a full time officer. He became Sergeant then was appointed Lt. When Duane Ellis became Chief of Police in 1999.

Sonora Police Chief Duane Ellis was born in Sonora to Otto and the late Emogene Ellis. Duane attended High School in Modesto, and later Stockton, graduating from Stagg High in 1968. Duane got his first taste of the Academic side of law enforcement receiving an AA in the Administration of Justice at Delta College. Duane was hired in 1974 as a full time officer when the Chief of Police was the late Ron Wano. He became a Sergeant in June of 1978 and Lieutenant in July of 1984. Duane Ellis became the Chief of Police in Nov. of 1999 and has acted in that capacity since then. Duane has represented the Sonora Police Dept. at the Police Olympics medaling in archery in four different games. In addition he shook the cobwebs off the football cleats and participated in the Pork Bowl football games that were held for three years during the 1980’s as a fund raiser in Tuolumne Co. The Pork Bowl was a friendly contest between County law enforcement and the Sierra Conservation Center prison guards. Duane married Sally in 1987 and has two children; Joe Ellis is a Sacramento Police officer and daughter Jennifer who is working toward her teaching credential in Bakersfield at Cal State University.

Top Hand – Greg Applegate who leads the City of Sonora through its day-to-day administration, through its political challenges and its many events in a sterling manner. We, the Posse, are proud to work with Greg and we are glad he came to the City of Sonora in 1990 and stayed. The Tuolumne County Sheriff’s Posse sincerely thanks Greg from the heart for all he has done to support the Posse, the Mother Lode Round-Up, to preserve our rich Western tradition and for his contribution to our community over the years.

Past recipients of Top Hand