Dragoon Gulch Trails are a series of short, pleasant trail loops through manzanita and oak trees with beautiful views. Dogs are welcome, leash laws apply. Dragoon Gulch is open to the public for free from dawn to dusk. There are two ways up to the top that create an intersecting 2 ½ mile loop and new vista trails that offer multiple ways to explore the hill. The trails start out along a seasonal creek. 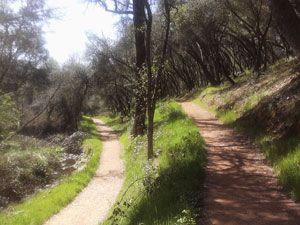 ides a spectacular view of Downtown Sonora and the surrounding foothills. There is a steep trail and a less direct and less steep trail to accommodate casual walkers and those who want a strenuous hike or jog.

The North Forest Trail average a 5% slope and is a moderate hike. It connects the Woods Creek Park area with the South Creekside Trail.

The South Creekside Trail is ADA accessible from the Aplie Lane Parking Lot with a 1.5% slope for 1,242 feet.

The North Creekside Trail is has a 4.5% slope and is rated easy, it is a dirt trail that passes several piles of “mine tailings” left from early mining operations in the gulch. North Creekside is the less steep connection to the Ridge and Vista Trails at the top.

Ridge Trail is 3,536 feet with an average 5% slope and rated a moderate hike.

Dragoon Gulch Trail extends down to Woods Creek Rotary Park, there is a sign near the baseball field bleachers with plenty of parking if you want to begin there or you can park over in the old hospital/7th Day Adventist church parking lot.

From Woods Creek Park The trail goes across a bridge and follows along North Forest Road. After a long block cross North Forest Road (which becomes W Bonanza Road which leads to Snell Street and Sonora High School) keep to the left of North Forest Road and go to the end of the dead end street, where the trail to the right will lead away from the buildings of the Mother Lode Adventist Junior Academy and toward the second parking lot for Dragoon off Alpine Lane.

The flat paved trail follows the drainage creek 1/3 of a mile to the second Dragoon Parking area as noted on the map below. The paved area ends there, the dirt and rock trails can be carefully walked when they are wet with few mud puddles but a few large flooded gravel areas during and just after winter rain. April to October the trail dries out completely and a tan-red dust can be expected to lightly cover your shoes. 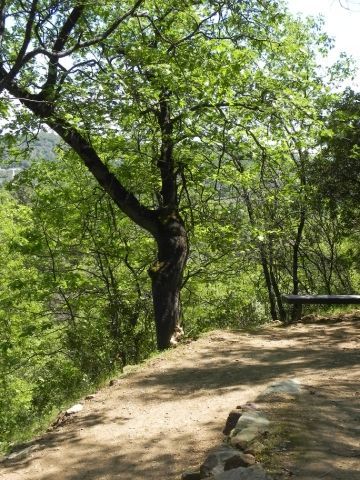 South Creekside Trail is the first part of the less steep route, it stays flat from the parking area along the brush near the seasonal creek for a while then joins the Alpine Lane trail near the top. The Alpine Lane trail heads up the hill immediately and is rocky as it starts out.

Just past the Alpine Lane Trailhead, South Creekside Trail begins the start of its loop. The junction, along with all other junctions on Dragoon Gulch Trail, are made obvious by an easy-to-read trail marker carved into a boulder. To the left, Vista Trail ascends a steep ridge lined by manzanita trees toward the top panoramic view.

There are a few benches located along the Ridge Trail which meets the Alpine trail where the Vista Trail continues up and ends at a 2,050-foot viewpoint, with benches.

The City of Sonora has plans to expand the Dragoon Gulch trail network to 9.7 miles pending environmental review and funding.

U.S. cavalry soldiers (dragoons) mined the area for gold in around the 1950’s. Not everyone found gold but one impressive nugget weighing 116 ounces that was sold for $1,600 in 1852. A more terrible event in 1951 involved two men who lured Captain George W. Snow to their Dragoon Gulch camp to rob and murder him. Snow was stabbed but was able to escape and get help, but died of his wounds at his home. He was able to identify his attackers who where arrested, tried, and sentenced to hang at Dragoon Gulch.