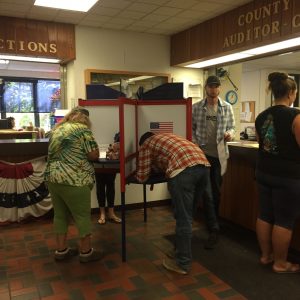 Sonora, CA — Looking ahead to the March of 2020 primary election, it appears that all of the supervisor races in Tuolumne County will have multiple candidates, as well as a judicial race.

There are two Tuolumne County Superior Court Judicial seats that will be on the ballot, and incumbent Kate Powell Segerstrom has filed a declaration of candidacy for the first seat, but Judge James Boscoe is planning to retire and not seek the second seat. Two candidates have emerged thus far and started the process of filing the needed paperwork. They include Tuolumne County District Attorney Laura Krieg and private attorney David Carl Beyersdorf.

In the District One Supervisor race, challenger David Goldemberg has qualified for the ballot, and incumbent Sherri Brennan is in the process of doing so.

In the District Four race, where John Gray is not seeking re-election, Kathleen Haff is the first candidate to file all of the paperwork and qualify for the ballot. Others going through the process are Dameion Renault and David Badgley.

In the District Five race, in which incumbent Karl Rodefer is not seeking re-election, potential candidates that are in the process of turning in paperwork include Jaron Brandon and Mike Suess.

In the Sonora City Council race there are three incumbents, Connie Williams, Matt Hawkins and Mark Plummer. At this point, both Williams and Hawkins have taken out nomination papers, along with challenger Ann Segerstrom.

The filing period runs through December 6, but it is extended to December 11 in races in which an incumbent is not running.