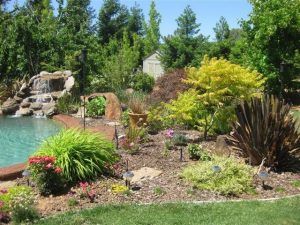 Gardening tells me a lot about my nature. Rather than taking care of my existing plants and gardens, I prefer to be planning the next garden, finding new plants, experimenting with new ideas and expanding my gardening horizons. That’s what keeps me energized, not the pruning, weeding and routine maintenance. Of course, that is a problem when existing gardens are relegated to the bottom of the priority list. Reorganizing those priorities in 2011, I made a feeble effort to curtail my inclinations for new development and to take a closer look at the needs of the gardens that are now 5-6 years old.

Thankfully, most of the plants have been wonderfully self-sustaining, but there were a few surprises. The challenges I found usually resulted from excess growth rather than “failure to thrive” due to neglect. Many had grown much bigger than I projected when they were selected and planted. Was it because they were mislabeled or was it the soil or growing conditions that produced so many giants? For example, I have several Phormium (New Zealand Flax) that supposedly were all the same. They now range from 1-5 feet in height. The problem with giants is that they encroach on others’ spaces. I found several plants that were so crowded by their neighbors that they were puny and misshapen. Interestingly, they did not survive when transplanted to a more hospitable location.

I did not plant anything new. Instead, I concentrated on shaping and thinning to create spaces between plants to give them an equal chance to breathe, be seen and survive. The lesson is to refrain from over-planting and crowding. Sometimes the problem was solved by simply making the bed bigger, giving plants room to grow without needing frequent pruning or transplanting. That also resulted in making the gravel paths smaller (a blessing, since they are weed magnets).

In addition to size, the shape and maintenance needs of various plants made a difference in how well they fared under circumstances of neglect. Some that needed pruning got so big that it was difficult to find “prunable” wood where I could cut. My favorites quickly became those plants that did not need pruning, clean up or cutting back-qualities often found in many of the Mediterranean and native plants such as Cistus (rock rose) and Ceanothus (native California lilac).

Interestingly, when looking more closely inside the gardens, I found several volunteers: a Chinese pistache (from a now dead parent), liquidambar, numerous Western redbuds, pines and oaks, peach and prune seedlings. Of course virtually all were in the wrong place. The choices were: leave them where they were, attempt transplanting or sacrifice them. My preference was to find gardening friends willing to find places in their gardens.

A difficult lesson learned repeatedly was to transplant when the plants will tolerate it, which is usually in the fall. I made the mistake of dividing hundreds of Pacific Coast Iris too late in the spring, (knowing that it should be done in the fall but thinking it was worth the risk since I needed to get that bed reworked) and losing all of them. The same was true when I transplanted a Japanese maple and a magnolia tree. The beautiful spring weather suddenly turned scorching and they succumbed. The lesson learned is that the plant’s schedule is more important than mine.

And then there was the problem of the “thugs” that took over and were almost impossible to eliminate. As much as I love valerian (Centranthus), acanthus and yarrow, it would take unique conditions to ever consider planting them again. There are other thugs and self-sowers that can be tolerated as long as they pull out easily, such as Zauschneria, cerinthe, creeping Jenny, tansy, Santa Barbara Daisy and strawberries. One needs to consider the root structure of the plant and be careful with those plants that have runners, unless a ground cover is desired.

So with those gardens revitalized, I am counting on them to continue to thrive so I can give some attention to other areas that are more demanding and high maintenance, such as the roses, vegetables and gardens bordering the house. I look forward to that project in 2013.

Marlys Bell is focusing on strategies for sustainable living on her property in Columbia.