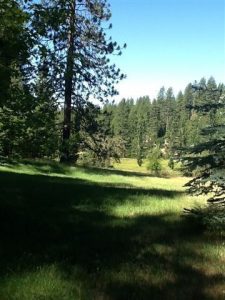 The Central Sierra Miwok have been living in villages throughout the Sierra Nevada foothills since before the 1620’s and have been a people who readily give thanks on a daily basis for their sustenance and connections to the natural world. What if the first Thanksgiving had happened between the Central Sierra Miwok and the first Euro-Americans to our local foothills? What foods would have been shared to form the basis of a Sierra Nevada traditional Thanksgiving feast?

Black oak acorns (Quercus kelloggi) would have been the main feature at such a fall feast and preparations would have included acorn soup, mush, breads or cakes. The Miwok consumed other types of acorns (valley oak, interior live oak, blue oak, canyon live oak) particularly in years with poor black oak acorn crops; however, the black oak acorns have been the most valued as they contained the least amount of tannins. Due to the bitter tannins, the acorns would have been processed before being eaten. Once the acorns had been gathered in the fall, the Miwok would have used rocks to crack open the shells then rubbed them together to remove the skins. The bared acorns would then have been pounded into meal in a Chaw’se (grinding stone). Water would then have been poured over the meal repeatedly to leach the tannins from the meal. The acorn soup would have been prepared by placing the acorn flour in a watertight basket, mixing it with water and adding hot rocks to cook it. Dried berries, herbs or pieces of meat could have been added to flavor the soups.

The primary source of protein at this hypothetical first Sierra Nevada foothill Thanksgiving would have been native deer: California mule deer (Odocoileus hemionus californicus) and the Columbian black-tailed deer (Odocoileus hemionus columbianus). The deer meat, if fresh, would have been roasted over an open fire or cooked in the ground. It is possible that dried deer meat could also have been on the menu as deer caught in the summer season were typically dried and stored for winter usage. The Miwok fished for native trout (genus Oncorhynchus) and wild Chinook salmon (Oncorhynchus tshawytscha) that once swam from the Pacific Ocean up Sierra streams to spawn; and small game animals like rabbit and squirrels could also have been served.

Various types of berries would also have been an integral part of a Sierra Nevada Thanksgiving meal. They would have included manzanita berries (genus Arctostaphylos), California blackberries and thimbleberries (genus Rubus), blue elderberries (Sambucus Mexicana) and currants and gooseberries (genus Ribes). As berries fruit in the summer, they most likely would have been dried prior to the feast. Manzanita berries, prized by the Miwok, were often used to make cider and jelly so it is possible that manzanita cider would have been imbibed at this particular dinner. Other foods that may have been on the menu would be greens such as bracken fern (Pteridium aquilinum var. pubescens), pine nuts, seeds, and bulbs or corms from plants such as harvest brodiaea (genus Brodiaea), native onions (genus Allium), yampahs

The Central Sierra Miwok were people that made their living from the land. Although, they did trade with some other indigenous peoples, their meals came from what they hunted, fished and harvested in their surrounding environment. Native plants also provided medicines and materials for tools, weapons, baskets, instruments and structures. As a result, the foods and ambiance of a ‘First Sierra Nevada Thanksgiving’ would center on the native flora and fauna of the area at that time and would have differed significantly from the original Plymouth Colony Thanksgiving as well as our typical Thanksgiving meal. It should be noted that the Miwok would not have celebrated Thanksgiving as we envision it but would have had a Big Time instead.

A heartfelt thank you goes to the Tuolumne Band of Me-Wuk Indians Cultural Committee for reviewing and revising this article to ensure its accuracy.

UCCE Master Gardeners of Tuolumne County can answer home gardening questions. Call 209-533-5912 or go to: http://ucanr.edu/survey/survey.cfm?surveynumber=7269 to fill out our easy-to-use problem questionnaire. Check out our website at: http://cecentralsierra.ucanr.edu/Master_Gardeners/ You can also find us on Facebook, or pick up the local Master Gardener book “Sharing the Knowledge: Gardening in the Mother Lode” at Mountain Books or the UCCE Office both in Sonora, CA.