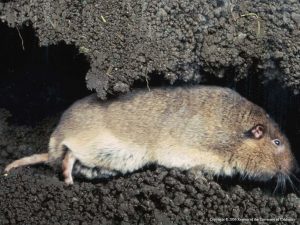 The Geomys (Earth Mice) and Theomys species of the common pocket gopher were highly thought of by Native Americans. Not only were they edible, gophers also propagated and spread Brodiaea corms (cluster lily bulbs). The Brodiaea corms were important to the Indians for food. A tribe member who came across a pocket gopher’s storage room stuffed full of corms obtained a jackpot for almost no digging. I know this is true, having twice found such a storage chamber. Each was half the size of volleyball and packed solid. Gophers have always been a food staple of predators and raptors.

Today this powerful, industrious, fierce animal conflicts with agriculture and suburbia. Natural predators are fewer, and gophers have two litters a year, making their population boom.

If two gophers – strangers to each other – meet in a tunnel, they fight to the death, yet it isn’t too uncommon to catch more than one within a few square yard areas. They may be a mated pair or two animals may have burrow systems close, but not intersecting. So, if you catch one gopher, leave traps out and move them around, at least until no fresh eruptions appear.

Our University of California Cooperative Extension office has information on protecting your plants from gophers, but there is also wonderful information provided to the public through the UC Integrated Pest Management Program. Here is the link to that information on gophers: http://ipm.ucanr.edu/PMG/PESTNOTES/pn7433.html

Another method of controlling gophers is to trap them. Take a long probe with you to find the hollow spots where the fresh tunnels enter the dirt mound. If you shovel up the mound blindly, you may destroy the funnel entry points and be unable to find them again. You will need a big, open hole to set the trap, preferably sloping downward. Try to find a good lateral (Y intersection or two or more tunnels). Set two or more traps to increase your chances. In intense cold or precipitation you won’t catch anything, but just before or just after rain, you can often get one. In summer ground that is too hard to dig, soak it first. If you buy a gopher trap, instructions are also included.

Bait with traps is not a requirement, but it is helpful. I sprinkle a tablespoon of cracked corn chicken scratch into the hole entrance after traps are down. Advice varies on whether to cover the hole or leave it open, or cover leaving a tiny crack to give the illusion that the surface is farther away. If one way isn’t working, try another.

A cat must be a proven hunter to cure your gopher problems, but he could be killing non-target birds and other wildlife. Wire barriers and container planting are okay for some people, but wire may not stand up to an uncontrolled huge gopher population. I saw one of the battery operated “supersonic” gopher repellants in action, and it was not supersonic! Dogs, in their mighty labor to make the kill, wreck more plants than the gophers do.

Traps can thin the gopher population, but be prepared to kill any still-alive gophers you pull out of your trap. If you are unwilling to deal with this possibility, you must choose another way to rid yourself of gophers. Good luck!

Pat Reh is a member of the Sierra Foothills chapter of the California Native Plant Society
(This article was edited by Francie McGowan who is a University of California Cooperative Extension Master Gardener of Tuolumne County.)