Why Sugar Pine Trees Are Special 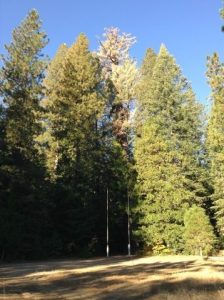 Sugar Pine “Pinus lambertiana” is a much-beloved pine species. Called “the most princely of the genus” by its discoverer, David Douglas (of Douglas fir fame), sugar pine has also received royal accolades, such as “king of the pines” and “queen of the Sierra.”

What makes sugar pine so special? Its beauty and attributes are unsurpassed. It is the tallest and largest of the pines, reaching heights of 200 feet, and more than 60 inches in diameter at breast height “dbh”. Old trees can exceed 500 years. Its wood excels in quality and value. And the cones are unmistakable, often over two feet long.

The name comes from its sweet sap, which John Muir preferred over maple syrup. Native Americans ate the sap and used the tree for a large number of purposes: seeds and bark for food; small roots for baskets; pitch for glue; gum to repair canoes and fasten arrowheads and feathers to shafts; and the leaves and bark for medicinal teas. As a historical side note, Sutter’s Mill, where the California gold rush began, was built to process sugar pine.

A sugar pine can be identified by its long needles, clustered five to a fascicle “small bundle”. They have long, horizontal branches that are often drooping and the ends from the weight of the large cones. Predation by the sugar pine cone beetle “Conophthorus lambertianae” can cause up to 93 percent loss of seeds. Other seed predators, such as the white-headed woodpecker, Douglas squirrel, and other birds and small mammals also eat sugar pine seeds, but they also contribute to the species by disbursing seeds away from the parent tree.

The natural range of the sugar pine extends from Mexico to Oregon and east to Nevada with over 80 percent of the trees found in California. Elevation ranges from near sea level to over 10,000 feet. Sugar pine is rarely found in pure stands, but is a component of many other plant communities. The densest populations are found on the western slope of the Sierra.

While young sugar pines are susceptible to fire, mature trees can survive most fires, and their susceptibility to secondary attacks by insects and disease following the fire, is low. The trees are ozone tolerant but not very drought tolerant. This low drought tolerance is one reason that sugar pine planting has not been as successful as some other pines.

Sugar pine populations have been declining due to an introduced pathogen: the white pine blister rust “Cronartium ribicola”. This disease causes cankers that girdle the main stem, killing seedlings and young trees. Luckily, some trees have a natural genetic resistance to the rust. Other diseases include dwarf mistletoe “Arceuthobium californicum”, which can weaken trees to attack by bark beetles. However, it spreads slowly and can be controlled by pruning.

The mountain pine beetle “Dendrotonus ponderosae” is the most important insect pest, often killing large groups of trees. A number of other bark and cone-feeding insects can also cause mortal damage, especially when the trees are stressed by drought or other conditions.

While sugar pine is considered a soft wood, it is a very hard pine. The wood is extremely desirable, offering large, clear pieces with high-dimensional stability. It is lightweight, easily

milled and worked, and has a straight, uniform grain unique among pines. It is used for items like moldings, door frames and special products like piano keys and organ pipes.