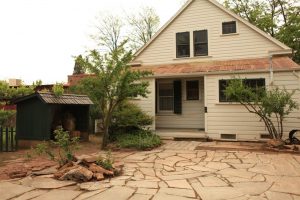 Mrs. McConnell let Gary Cooper and Grace Kelly use this patio during their breaks filming High Noon. They would find shade under a fig tree back there that was since cut down, and now it's growing back. The new fig tree was a wonderful surprise.

Since the days of the Gold Rush, when families joined the men who mined the hills of the Motherlode for gold, gardens were planted and, as last week’s article related, some of them are still dotted around the foothills.

The Wilson-McConnell home in Columbia has been vacant since Mrs. Geraldine McConnell passed away in 2003, but her garden lives on. Instrumental in establishing Columbia as a state park, Mrs. McConnell planned and refurbished the yard surrounding her old farm house. She consulted historians in Colonial Williamsburg, Virginia for advice about historical plants from the 19th century. Rows of irises, daffodils, tulips, a rambling rose, snowberry bushes and bleeding hearts are some of the plants she chose.

Mrs. McConnell’s fig tree, located in her back patio, provided shade to Gary Cooper and Grace Kelly when “High Noon” was being filmed here in 1951-1952. Mrs. McConnell allowed the use of her patio and shade tree for a respite and privacy during the filming. Alas, the fig tree is no longer there, but a round hole in the flagstone patio where the tree once stood has remnants of a trunk with fresh, healthy shoots growing out of it!

Gary and Mary Anderson own the Hamton-Anderson home on South Shepherd Street. Their yard still has three rose bushes that were planted in the late 1800s.

The old Kell-Shine home, which is now called Bradford Place Inn and owned by Eli Shahar, also features roses from the 1800s. This is a very quiet little courtyard that is lush with vegetation, a bird fountain and a magnificent Euonymus, or spindle tree. The wood from some varieties of Euonymus trees was traditionally used for making spindles for spinning wood. The shade this tree provides to this little courtyard sets it apart from the yard’s proximity to the heart of downtown. Its trunk was trained for years to twist and turn, giving the tree a very appealing character.

The most unique aspect of this garden is its old water well, now capped. The garden sits on a corner lot and, in the 1850s, had a huge gazebo that was a popular gathering spot for the locals, as well as travelers. According to Eli Shahar it is very likely that Mark Twain used that well for refreshment during his visits to Sonora while living in the foothills.

The garden at the Tuolumne County Museum on Bradford Street also offers a splendid mixture of historic and contemporary plants. Mock Oregon and wisteria were both planted in the early 1900s, and a lacy shrub is over 40 years old. Also included in the garden are blue and pink hydrangeas, irises, a Lady Banks rose, a dogwood tree, narcissus, evergreen ivy, to name a few of the 58 plants and shrubs on the property.

These heritage gardens provide a nostalgic reminder of the history embedded in the Mother Lode, and demonstrate the loveliness and respite gardens afford us. What can be more rewarding than sipping your morning cup of coffee or tea in the cool tranquility of your own garden? A garden that has been thoughtfully planned out and lovingly tended can become an extension of your own living room for relaxation and reflection.